Players can choose to simulate being an active school shooter

MIAMI (AP) — An upcoming computer video game that would allow players to re-create school shootings by stalking school hallways and racking up kills has been condemned as insensitive and inappropriate by the parents of students who were shot to death during the massacre at Marjory Stoneman Douglas High School.

The game is titled “Active Shooter” and is slated for a June 6 release. It is branded as a “SWAT simulator” that lets players choose between being an active shooter terrorizing a school or the SWAT team responding to the shooting.

It was developed by Revived Games and published by the company Acid, which has said it plans on selling the game for $5 to $10 on the video-game marketplace Steam and releasing an alternate “civilian” mode. It will not be sold on a console system.

The Miami Herald reports that a description of the game comes with the following disclaimer: “Please do not take any of this seriously. This is only meant to be the simulation and nothing else. If you feel like hurting someone or people around you, please seek help from local psychiatrists or dial 911 (or applicable). Thank you.”

Revived Games and Steam’s publisher, Valve Corp., did not respond to messages from the newspaper seeking comment.

Acid said in a blog post Thursday that its game does not promote violence and that it might remove the shooter’s role in the game.

On Sunday, Ryan Petty, the father of a 14-year-old Marjory Stoneman Douglas High student killed during the Feb. 14 mass shooting, called for the game’s release to be canceled.

“It’s disgusting that Valve Corp. is trying to profit from the glamorization of tragedies affecting our schools across the country,” Petty, who is running for Broward County School Board, said in a statement. “Keeping our kids safe is a real issue affecting our communities and is in no way a ‘game.'”

Andrew Pollack, the father of 18-year-old Meadow Pollack, who was killed on the third floor of the high school’s 1200 building, said “sick people” were behind the game’s creation and release. He said these kinds of games desensitize young people to the tragedy that befell his daughter.

“The last thing we need is a simulated training on school shootings,” said Pollack, the founder of the school-safety advocacy group Americans for CLASS. “Video game designers should think of the influence they hold. This really crosses the line.”

Acid noted that other violent games have existed on Steam’s platform, including a 2015 game that involved killing civilians at random, though not in a school setting.

Information from: The Miami Herald, http://www.herald.com 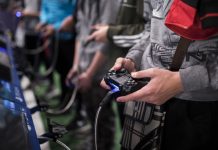