Parkland school shooting survivor and gun control activist David Hogg claimed he’s planning a run for Congress, after asking himself if he’s destined to be remembered throughout history.

The 18-year-old high school graduate is taking a gap year to work on the 2018 midterm elections before committing to college and had time to talk with New York Magazine, in an interview published Sunday, about his future.

“I think I’ve come to that conclusion,” Hogg told New York Magazine write Lisa Miller. “I want to be at least part of the change in Congress.”

Hogg has taken a strong stance against the GOP in his home state of Florida and even went after establishment Democrats during the interview. “Older Democrats just won’t move the f— off the plate and let us take control. [House Minority Leader] Nancy Pelosi is old,” he told New York Magazine.

Hogg previously praised himself in an interview ten days after the February Florida shooting from his gated community home, asking himself if he’d be remembered for the rest of time.

“We really only remember a few hundred people, if that many, out of the billions that have ever lived,” Hogg said. “Is that what I was destined to become?”

Hogg said he’s an easy target for ridicule because of his loud views and physical appearance, but said he doesn’t let it bother him and continues to push on with his agenda.

“I’m easy to pick on because I’m a string bean,” he told the magazine. “I’ve had this sh*t said about me my entire life … twig arms and sh*t like that. I don’t care.”

Miller asked Hogg if he’s nervous about inciting violence against himself with his crass and animated behavior, citing an instance where he became emotional with a journalist.

“He told one journalist, ‘The pathetic fuckers that want to keep killing our children, they could have blood from children spattered all over their faces and they wouldn’t take action because they all still see those dollar signs.’” she wrote.

“I asked him whether he worries, using that language, about riling up NRA members enough that they threaten his life and his mother’s,” Miller continued. “If somebody is stupid enough to try anything on us, that will make the movement even stronger,” Hogg replied. 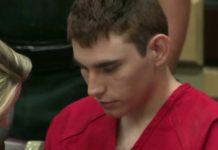