There may be nothing “independent” about the Broward school district’s report on Parkland shooter Nikolas Cruz, but a Broward circuit judge ruled Friday the public has a right to see it anyway.

Judge Elizabeth Scherer would have no part of Cruz’s defense attorneys, who scoffed at the Cruz report saying it would hinder their client’s right to a fair trial.

The report is a put-up job, they argued — it’s all suspicious — because it was based on a consultant’s review of Cruz’s school records. The consultant was hired by the Broward school district.

David Frankel, one of Cruz’s defense attorneys, told the judge, “It’s a whitewash.” He insisted the report was commissioned by the school district “to absolve it of responsibility for how it handled Cruz’s complex psychological problems.”

Scherer disagreed. She did note “the report is heavily blacked out — about 27 pages that deal with the specific details of Cruz’s school records are concealed at the school district’s request.” But she said, “I do find that there is nothing in the redacted report that poses a threat to the administration of justice and the defendant’s right to a fair trial.” 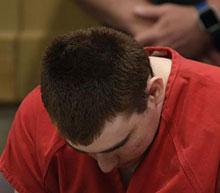 Exactly when the report will be released was not clear at press time.

It wasn’t the first time defense attorneys noted irregularities in the case. One of the defense lawyers blasted the State Attorney’s Office after it emerged that a few of its staffers attended a potluck arranged by members of the grand jury that indicted Cruz. The grand jury met between January and June on a host of cases, and finished its service three weeks before the potluck.

Prosecutors said no state funds were used at the event. “After a grand jury has finished their term and they have been discharged from service, there is nothing inappropriate with former grand jurors inviting staff members from our office to a potluck picnic,” according to an email from the State Attorney’s Office and reported by Broward’s J.A.A.B. Blog.

The defense team said it will not appeal Scherer’s Friday ruling, according to the Fort Lauderdale Sun-Sentinel.

Cruz, 19, appeared in court as he always does, amid tight security, head cast down, in handcuffs and leg irons and wearing the uniform of a maximum-security inmate. He did not speak publicly, talked only with his attorneys.

What Cruz’s lawyers really wanted, said the Sun-sentinel, was for the judge to bar release of the report because it would “make it difficult to find an impartial jury if the case goes to trial on charges he murdered 17 people and wounded 17 others on Feb. 14.”

The School Board-hired consultant was Collaborative Educational Network of Tallahassee. It was their job to examine how district officials handled Cruz’s education and the support services the district provided him. “The report is expected to identify any problems and recommend improvements the school district should make,” according to the newspaper.

Defense attorneys find it suspicious that the district recommended portions of the report be blacked out to comply with Cruz’s privacy rights under federal and state laws.

A civil court judge ruled last week the altered report should be released, but her order was placed on hold until the criminal trial judge heard arguments from the defense team.

Attorneys for the South Florida Sun Sentinel and other media outlets filed court documents arguing “the report is a taxpayer-funded public record that should not be hidden from view.” And Judge Scherer agreed.

Before the Valentine’s Day massacre at Marjory Stoneman Douglas High School, Cruz had a long history of fights, threats toward students and a bizarre fixation on weapons and Nazi imagery.

No date has been set for the trial.