Crist: “This is the worst piece of legislation I have seen in my 20 years of public service.”

Yesterday the House passed the American Health Care Act by a slim 217-213 margin and started the Republican move to repeal and replace Obamacare. It is a promise that was seven years in the making and there is still a very long way to as it now moves on to the Senate.

Just before yesterday’s vote I had a chance to speak with Congressman Charlie Crist, who represents the 13th District of the Sunshine State that includes St. Petersburg. He was my special guest for the latest edition of the Politically Incorrect Podcast that you can hear now!

While, President Donald Trump was celebrating in the White House Rose Garden with Speaker of the House Paul Ryan, the former Florida governor was anything but in a celebratory mood.

Crist did not mince any words when asked about his thoughts on the new AHCA. “ It is by far the worst piece  of legislation I have seen in twenty years of public service, said Crist.”

He was also passionate about the women’s issues that were part of the bill that would get rid of the Planned Parenthood funding. As well as allowing everything from breast cancer to pregnancies to be in coverage peril with the new AHCA.

Crist also lamented what he called “heartless,” the lack of coverage for the very poor as well as the very sick. The elderly are also at risk of having their insurance premiums going up to five times what they are now.

He hopes for level heads and a bi-partisan bill coming out of the Senate, where the action is going next. He also encouraged opponents of the bill to contact Sen. Marco Rubio and let him know that this legislation goes way too far.

Be sure to listen to the entire podcast for all of the details and for Congressman Crist’s take on the healthcare issue. 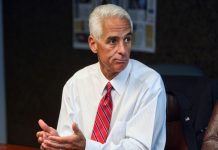