Claimed he was standing his ground

VIERA, Fla. (AP) — Prosecutors in Florida agree that an Iraq war veteran who suffers from post-traumatic stress disorder was systematically bullied by his neighbors.

But they said the bullying didn’t justify killing them. Florida Today reports that Billy Woodward was sentenced on Wednesday to two life terms for murder.

Woodward claimed he was standing his ground and defending his family when he shot his neighbors in Titusville, Florida, on Labor Day weekend in 2012.

The newspaper has reported that he wore camouflage and crawled through the grass at night to fatally shoot Gary Hembree and Roger Picior. Neighbor Bruce Blake survived 11 gunshot wounds.

Prosecutors said Woodward’s security cameras recorded weeks of bullying, taunting and threats, but he shot the men out of anger, not fear. 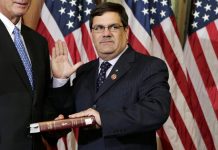