Bears ownership would like to put Chicago in the rearview mirror.

The National Football League’s Chicago Bears franchise new president Kevin Warren should register as a political lobbyist, if he has not done so already. Warren is the point man for the Bears’ business in the ownership’s quest to build a football stadium-village on land the business might take over by April 1st in the Chicago suburb of Arlington Heights. Warren will try to convince Arlington Heights and Illinois politicians to pour taxpayers money into a private business and Warren will extol the virtues of how building a stadium that probably won’t be used more than a few dozen times a year and a surrounding village complete with retail and office space will be a plus for the community. The Bears’ stadium-village will create jobs even though brick and mortar retail establishments are not exactly thriving anymore.

The state of Illinois handed Bears’ ownership a defeat when it decided not to allow a $400 million grant to “a professional sports organization that moves its operations from one location in the state to another location in the state.” Warren has some work to do in the Illinois capital of Springfield to convince lawmakers to gift that $400 million to the Bears’ ownership. Warren knows the job ahead, get a stadium deal done. “We will continue to do it the right way. We will work hard. We will have fun. We will be diligent. We will be detailed. We will be methodical. We’ll operate with integrity and honor at every step of the way. This is a special time in the NFL, but most of all it’s a special time for the Chicago Bears. Everything is ahead of us. All we need to do now is go and grasp it, put in the time and energy and effort.“ Bears’ ownership wants its own money-making playground. 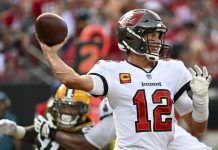