TAMPA (AP) — A self-proclaimed neo-Nazi arrested after agents found bomb-making materials in his Florida apartment while investigating the slayings of his two roommates planned to use the explosives to harm civilians, nuclear facilities and synagogues, federal prosecutors said.

The prosecutors made the allegations in court documents on Monday, a day before a judge set a $200,000 bond and conditions for the release of Brandon Russell, 21. They want to keep Russell in jail before his trial, arguing that he poses a threat to the public after a third roommate arrested in the killings at their apartment in Tampa told authorities Russell was targeting the sites.

The murder suspect, Russell’s roommate Devon Arthurs, was arrested last month after telling police he fatally shot Jeremy Himmelman, 22, and Andrew Oneschuk, 18, because they were neo-Nazis who disrespected his recent conversion to Islam. Arthurs said he had also been part of a neo-Nazi group started by Russell called Atomwaffen until he converted to Islam.

When police took Arthurs to the apartment to check out his story, they found Russell outside the door crying. A member of the Florida National Guard, Russell was dressed in full military uniform and had just returned from duty.

Inside officers found the bodies of Himmelman and Oneschuk. Arthurs told police that Russell, who kept a framed picture of Oklahoma City bomber Timothy McVeigh on his dresser, was not involved in the shootings, but that he was planning a bombing.

Agents say that inside the apartment and its garage, they found HMTD, a highly volatile explosive, as well as other materials used to make explosives, including ammonium nitrate, which federal prosecutors say is a blasting agent. They also found empty shell casings with fuses and electric matches, which could be used for detonation, and a written recipe for explosives.

Russell admitted to making the HMTD, but claimed he had been a member of a college engineering club and that the substance was for “setting off model rockets and balloons,” the documents stated. Agents said they found nothing related to rockets in the apartment.

On May 20, after speaking with authorities, Russell said he wanted to leave town and visit his father in Palm Beach and left the Tampa area while an arrest warrant was being prepared. Contacted by law enforcement, his family said they hadn’t heard from him.

Russell had picked up a friend, another self-described neo-Nazi, William James Tschantre, 20, who was identified in a Monroe County Sheriff’s Office report. Tsanchtre told the agents that he grabbed his life savings, $3,000, quit his job and left with Russell.

The pair told agents they stopped at a sporting goods store and purchased rifles and ammunition before heading south.

“According to Russell’s friend, they had no specific destination in mind and had no plans to hurt anyone or do any harm,” the court documents state.

The next morning, Russell was arrested by Monroe County sheriff’s deputies at a Burger King in Key Largo after the FBI had issued a “be on the lookout” advisory. In his car, according to court filings, they found two rifles, hundreds of rounds of ammunition, binoculars and a skull mask.

In arguing for his bond, Russell stated that the rifles and ammunition he purchased could be used for hunting. His attorney, Ian Goldstein, was not available for comment.

Prosecutors had asked the court to reconsider, arguing that Russell’s bomb-making materials and flight were cause enough to keep him behind bars. Russell is charged with unlawful storage of explosive materials and possessing a destructive device and unregistered firearm.

“Detonating this type of bomb could easily cause a vehicle to explode, killing all of the occupants and causing grave damage within a large distance around the explosion site,” Acting U.S. Attorney W. Stephen Muldrow wrote.

But U.S. Magistrate Judge Thomas McCoun III issued the terms of Russell’s release anyway, ordering him placed in the custody of his grandmother in Orlando.

He also barred Russell from using a computer “to promote or engage in neo-Nazi activities during the pretrial period.” 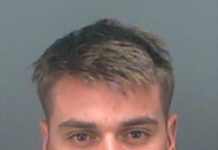 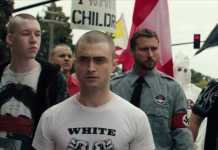 Florida is home to many Neo Nazi groups and growing