The Amtrak’s popular Silver Star was on its way from New York to Miami with eight crew members and about 140 passengers when it was involved in a crash with a freight train near the small South Carolina town of Cayce very early Sunday morning.

There was no immediate word on the cause of the wreck. The National Transportation Safety Board sent investigators.

The crash happened by a rail yard about 10 miles (16 kilometers) south of Columbia, where several track spurs split off for freight cars to be unloaded. Authorities said they haven’t determined if both trains were moving at the time.

The Amtrak train’s lead engine and some of the passenger cars derailed, Amtrak said. TV footage showed the locomotive on its side, its front crumpled.

At least 89 people were taken to hospitals, and three were admitted, hospital officials said.

Amtrak officials worked to gather luggage and other belongings and line up buses to take passengers on to their destinations. Those who weren’t hurt were taken in patrol cars to a shelter, and local businesses provided coffee and breakfast.

On Wednesday, a chartered Amtrak train carrying Republican members of Congress to a strategy retreat slammed into a garbage truck at a crossing in rural Virginia, killing one person in the truck and injuring six others.

And on Dec. 18, an Amtrak train ran off the rails along a curve during its inaugural run on a route south of Tacoma, Washington, killing three people and injuring dozens. It was going nearly 80 mph, more than twice the speed limit. 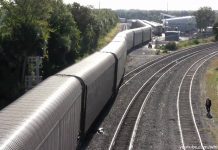