ROSWELL, Ga. (AP) — The most expensive House race in U.S. history heads to voters Tuesday in the northern suburbs of Atlanta.

Either Republican Karen Handel will claim a seat that’s been in her party’s hands since 1979 or Democrat Jon Ossoff will manage an upset that will rattle Washington ahead of the 2018 midterm elections.

Their matchup in Georgia’s 6th Congressional District has become a proxy for the national political atmosphere and a test of GOP strength early in Donald Trump’s presidency.

Here are five things worth knowing about the race:

Yet Ossoff barely mentions the president, talking instead in generalities about “restoring civility” and the importance of Congress as an oversight body. He doesn’t constantly refer to Handel, a former Georgia secretary of state, directly either, instead pitching his “fresh leadership” against “career politicians.”

Handel, 55, embraces her experience as a statewide and local elected official. “You know me,” she says, adding often that Ossoff has “no record” and “inflates his resume.”

She’s also known as a Susan G. Komen Foundation executive when the organization in 2012 sought to cut off its support of Planned Parenthood, which provides services including abortions.

The Georgia 6th is an affluent and well-educated district that has elected Newt Gingrich, the former speaker; Johnny Isakson, now Georgia’s senior U.S. senator; and most recently Tom Price, who resigned in February to join the administration.

But even with that pedigree, Trump barely edged Democrat Hillary Clinton in November, giving Ossoff his opening once Price was confirmed. Ossoff hopes to maximize the district’s Democratic base and pick up just enough independents and moderate Republicans who don’t align with Trump.

Handel has handled Trump gingerly. She barely mentioned him ahead of finishing second to Ossoff in an April primary. She welcomed him for a fundraiser in late April, but it was closed.

Even a Trump Cabinet member and former Georgia governor, Agriculture Secretary Sonny Perdue, acknowledged the conundrum at a recent Handel rally, saying “some Republicans” are “turned off” by the president.

But that hasn’t stopped from Trump from weighing in on the race. In one early Tuesday tweet, Trump criticized Ossoff, saying he’ll raise taxes, is weak on crime and “doesn’t even live in district.” Ossoff lives in Atlanta, south of the suburban district. He has said the address is close to Emory University, where his fiancee attends medical school.

In another tweet, Trump praised Handel as a hard worker who will fight for lower taxes, great health care and strong security.

Ossoff raised more than $23 million, most from outside Georgia. He emphasizes it’s mostly from individual donors. Handel notes that many of those people live in Democratic-leaning states like California, New York and Massachusetts.

Of course, Handel’s benefited from outside money, too; it just hasn’t flowed through her campaign, which has raised less than a quarter of Ossoff’s haul.

Democrats have plenty of energy nationally, but it hasn’t translated to the electoral scoreboard.

The party needs to flip at least 24 GOP-held seats by next November to reclaim a House majority.

Party insiders say Georgia is not a must-win given the GOP advantages here, but winning in a district like this could put them on their way to a successful 2018, and it would embolden donors and volunteers nationally — and potentially boost candidate recruiting in friendlier districts.

Losing would raise questions about whether Democrats can turn protests and fundraising records into enough votes.

For Republicans, it’s about defense, with a healthy dose of fear.

Winning in this once-safe GOP district would follow House special election victories this year in GOP-held districts in Kansas and Montana. Republicans are favored to hold a fourth seat up Tuesday in South Carolina, while Democrats already held their lone open seat in a California special election.

But if Handel loses, it will be a clear warning sign to House Republicans facing tough races in other suburban districts across the country, many of them among the 23 GOP-held seats where Trump trailed Clinton in 2016. And it will make all the clearer that there is no easy path for Republicans to run under Trump’s banner — he’s still popular with the base, but the base isn’t large enough to win every seat that Republicans hold now.

THERE’S ONE LAST-MINUTE CURVEBALL, BUT IT MAY NOT MATTER

A little-known political action committee unveiled a last-minute ad trying to link Ossoff to the shooting of a Republican House leader and others at a GOP congressional baseball team practice last week outside Washington.

Handel disavowed the ad, which blames the “violent left” for the shooting and suggests such acts would continue if Ossoff wins. Ossoff called Rep. Steve Scalise’s shooting a “national tragedy” that should not be politicized.

Principled PAC says it made a “five-figure” buy on Fox News, a low spending total on cable news that likely means the spot got more attention from the campaign and reporters than from voters. 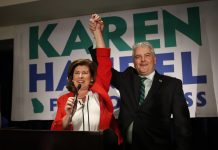 In Georgia, Handel thanks Trump and reaches out to Democrats