DUNWOODY, Ga. (AP) — Republican Karen Handel declared victory in Georgia’s 6th Congressional District with a promise that she’ll work to gain the confidence of voters who backed her Democratic opponent.

But in the same speech Tuesday night, Handel also thanked President Donald Trump, underscoring her campaign’s triumph over the anti-Trump resistance in the traditionally Republican district.

Handel won about 52 percent of the vote to quell the upstart phenomenon of Jon Ossoff, a 30-year-old Democrat who raised more than $23 million, much of it from out of state.

The thank you to Trump was Handel’s most public show of support of the man who wasn’t embraced by many voters in the well-educated suburban Atlanta district in November. She had handled Trump delicately throughout a primary and runoff election to fill the congressional seat vacated by Tom Price to take a spot in Trump’s cabinet.

Handel thanked national and state Republicans for backing her campaign before making a direct appeal to Ossoff’s supporters.

“To the Jon Ossoff supporters, know that my commitments, they extend to every one of you as well,” Handel said. “We may have different beliefs, but we are part of one community, the community of the 6th District. And I will work just as hard to earn your confidence in the weeks and months ahead.” 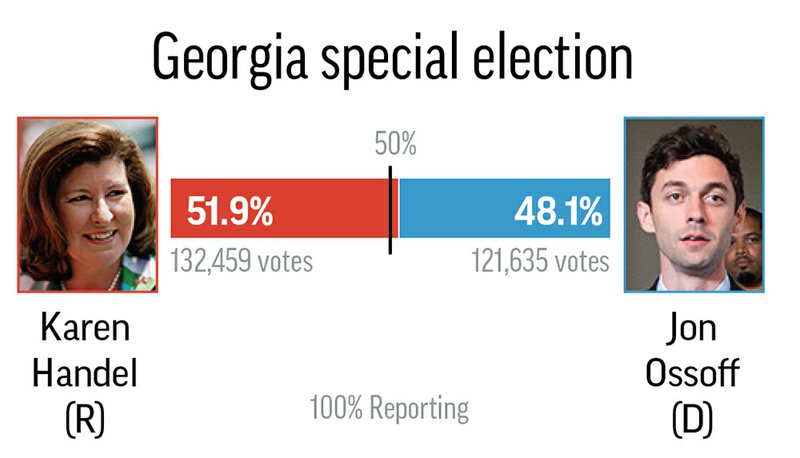 “What happened on that ballfield was a terrible tragedy and we need to all continue to lift up Steve and the others who were injured that day,” Handel said. “And we need to also lift up this nation so that we can find a more civil way to deal with our disagreements. Because in these United States of America, no one — no one — should ever feel their life threatened over their political beliefs and positions.”

A day after the election, Democrats are left with the bittersweet achievement of another tighter-than-usual margin, still searching for a contest where anti-Trump energy and flush campaign coffers actually add up to victory.

Handel, who left an abusive home as a teen, will be the first Republican woman to represent Georgia in Congress.

In a Tuesday night tweet, Trump congratulated Handel, saying “we are all very proud of you!”

“She personally told me she was rock solid” with the president, said Webb, 70. He added that 6th District Republicans united against a Democratic candidate many saw as a tool of his national party leaders.

Republicans immediately crowed over winning a seat Democrats spent at least $30 million trying to flip. “Democrats from coast to coast threw everything they had at this race, and Karen would not be defeated,” House Speaker Paul Ryan said in a statement.

Democrats must defend their current districts and win 24 GOP-held seats to regain a House majority next November. Party leaders profess encouragement from the trends, but the latest losses mean they will have to rally donors and volunteers after a tough stretch of special elections.

Ossoff told his supporters: “The fight goes on.”

Handel is the latest in a line of Republicans who have represented the Georgia 6th since 1979, beginning with Newt Gingrich, who would become House speaker. Most recently, Tom Price resigned in February to join Trump’s administration. Handel emphasized that pedigree often during her campaign and again during her victory speech.

She also noted throughout the campaign that she’s lived in the district for 25 years, unlike Ossoff, who grew up in the district but lives in Atlanta, a few miles south of the 6th District’s southern border.

Handel insisted for months that voters’ choice had little to do with Trump. She rarely mentioned the administration, despite holding a closed-door fundraiser with the president earlier this spring. She pointed voters instead to her “proven conservative record” as a state and local elected official.

Yet Handel often embraced the national tenor of the race, joining a GOP chorus that lambasted Ossoff as a “dangerous liberal” who was “hand-picked” by House Democratic leader Nancy Pelosi of California. She also welcomed a parade of national GOP figures to Atlanta to help her raise money, with Ryan and Vice President Mike Pence holding fundraisers following Trump’s April visit.

It was enough to help Handel raise more than $5 million, not a paltry sum in a congressional race, but only about a fifth of Ossoff’s fundraising haul. The Republican campaign establishment, however, helped make up the difference. A super PAC backed by Ryan spent $7 million alone; the national GOP’s House campaign arm added $4.5 million.

On policy, Handel mostly echoes the GOP line. She said she would have voted for the House Republican health care bill, though she sometimes misrepresented its provisions in debates with Ossoff.

She touts supply side economics, going so far as to say during one debate that she does “not support a living wage” — her way of explaining her opposition to a minimum-wage increase.