LONDON (AP) — In the big book of political blunders, Theresa May’s decision to hold a snap election to solidify her Brexit mandate will rank among the most memorable — and the most unnecessary.

The British prime minister was cruising along two months ago with a solid majority in Parliament and several years to run on her party’s mandate. There was no need for her to put her position on the line, and she had said earlier that an election was not needed.

But her party’s huge lead in the opinion polls — 20 percent in most cases — made the prospect too tempting to pass up.

At the time, it seemed to make sense. Her main opponent — Labour Party leader Jeremy Corbyn, known for his left-wing views — was stumbling from mishap to mishap, unable even to muster solid support from his party’s own lawmakers. May seemed virtually certain to add to her party’s strength, win a mandate in her own name — not just as a stand-in for her predecessor, David Cameron, who quit after Britain voted to leave the European Union last June — and gain five years to negotiate a deal on Britain’s exit from the European Union without facing a pesky national vote soon after the scheduled Brexit date of March 2019.

So she flung the dice — and lost.

After Thursday’s vote, May’s Conservative Party still has the largest number of lawmakers, but lacks a parliamentary majority. It may well be able to form a minority government with the help of Northern Ireland’s Democratic Unionist Party in the coming days and weeks, but the prime minister’s ability to cling to the keys of Number 10 Downing Street is very much in doubt, and her stated goal of unifying the country behind her ahead of the upcoming Brexit negotiations with EU leaders is utterly out of reach.

The result has caused a fresh bout of selling of the British pound, and made EU leaders still more uncertain about Britain’s Brexit priorities. The inherent weakness of a minority government raises the prospect of another election later this year, which would undoubtedly cause more turbulence.

It is too early to say with any certainty what the change from a majority to minority government will mean to Brexit. Some experts are calling the Conservatives’ unexpected loss of seats a rejection of the “hard Brexit” May has advocated, which would take Britain out of the single market and the customs union and which could see tariffs slapped on British exports to the EU.

Voters may have been unimpressed with her refrain that “no deal is better than a bad deal” because it raised the prospect of Britain crashing out of the EU without a trade-and-immigration system to replace the existing, well-integrated procedures that have evolved over decades of European integration.

Corbyn’s newly energized Labour Party officially backs Brexit — since voters endorsed it in a referendum last year — but many important figures in the party advocate a much “softer” approach, and their views now may now carry sway.

Corbyn’s rise is one of the biggest surprises. Since winning the Labour leadership in 2015, few commentators gave him much chance of doing well nationally — he was seen by many as too left-wing, too much of a pacifist, and tarnished by prior associations with the radical group Hamas and the IRA. The bearded, often rumpled Corbyn seemed to suffer from a chronic charisma deficit — until the campaign began. Then, he ran a disciplined, coherent campaign despite a few miscues, and deftly capitalized on May’s mistakes.

May’s campaign seemed to suffer from her refusal to debate and her propensity to appear only in carefully controlled situations. She was listening only to a small group of aides, and they failed to get her out and interacting with crowds.

Unlike the Labour Party — which sweetened its platform with things like free tuition for university students — the Conservative Party contained little to get people excited.

He gained ground when she outlined a policy on nursing care for the elderly that was swiftly derided as a “dementia tax” and in the final days repeatedly hammered May for cutting 20,000 police officers during her tenure as interior minister — an assertion that carried weight as major terrorist attacks hit Manchester and London.

But the attacks did not seem to work.

It is May, not Corbyn, whose career appears to be in tatters. 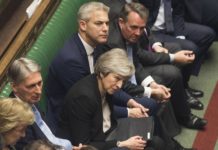 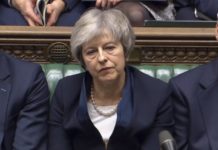 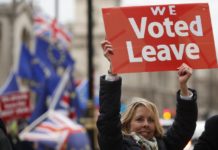 Troops On Call In London As Brexit Deal Is Falling Apart 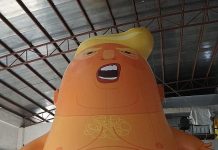