Hillsborough County’s All for Transportation sales tax referendum is subject to a performance audit that must be completed and available to the voting public by Sept. 6.

If it makes the ballot and passes, the 1 percent increase would make Hillsborough County, along with Liberty County, the highest sales tax jurisdictions in Florida at 8 percent.

Another hurdle: the developer-driven citizens’ petition for the referendum must obtain enough valid signatures by Friday, July 27. It will be close.

The petition drive was cobbled together at the 11th hour. Timing is critical and a thorough audit takes months, according to multiple sources.

HB 7087, passed during the 2018 legislative session, added Section 10 to Florida Statute 212.055 governing local tax referendums. The legislation requires the audit to be completed and published online 60 days prior to the election for any local sales tax increase.

The added Performance Audit language provides criteria for what the audit will examine and evaluate. This includes how economically efficient or effective the proposed tax hike program is, the tax hike program’s goals and objectives, alternative methods of providing the program, performance measures to measure the program’s success — and is there adequate and accurate public documentation relating to the program?

“Money that the Hillsborough County School District needs to build schools and replace air conditioners might be further from reach, thanks to a new state law and a bureaucratic process required before the voters can decide on a tax referendum.

“The law could delay a sales tax referendum by about eight months, past the November election that would usher in the needed bonanza.

“An April 16 letter from the Legislature’s Office of Program Policy Analysis and Government Accountability said districts had to submit their resolutions by April 23 to arrange a required performance audit by the legislative office, known as OPPAGA.”

Hillsborough spokesman Grayson Kamm said that when district leaders contacted OPPAGA to arrange the audit, they were told there could be a six-month wait. And the results would have to be posted for two months before the referendum could take place.

OPPAGA contacted all counties and school boards in the State. OPPAGA’s April 16 letter, addressed to the chairs of each county commission and school board (copy also found here), stated to contact OPPAGA by April 23rd for any referendum on the August or November ballot and to contact them ASAP if a referendum was being considered.

That same June 14 Times article that reported the audit required could delay a school board sales tax referendum also stated this:

“A citizens’ group called All For Transportation is gathering the required petition signatures to place a question on the November ballot about a penny sales tax to subsidize public transportation and needed road repairs in the cities and county. And, because the law requiring the OPPAGA audit specifies “county or school district” and the citizen group is neither of those two things, they do not believe they will have to take that step.”

We do know there’s been some confusion regarding this new audit requirement, especially with a sales tax hike referendum initiated by a petition effort. However, from numerous sources we spoke to or contacted, all indications were that any local tax referendum regardless of how it got on the ballot, required the performance audit be completed and published at least 60 days prior to the election.

The Times also reported on June 18 regarding the school board proposed sales tax hike referendum (emphasis mine):

“The board voted 5-0 to submit a tax referendum resolution to the state, a first step toward trying to place such a question on the Nov. 6 ballot — though other factors may render that a futile step.

“The audit, which will not cost the district anything, will likely take about six months. The results must to be posted for two months after that, making it unlikely that such a referendum could appear on the November ballot.”

Something changed with the AFT PAC between June 14 and July 9. Perhaps they were advised by someone the performance audit does apply to any local tax hike referendum. And that would include AFT’s proposed 14 percent transit sales tax hike referendum to raise Hillsborough County’s sales tax rate to 8 percent, the highest in the state.

Obtained via a Public Records Request, AFT emailed and snail-mailed a letter to OPPAGA on July 9, 2018. 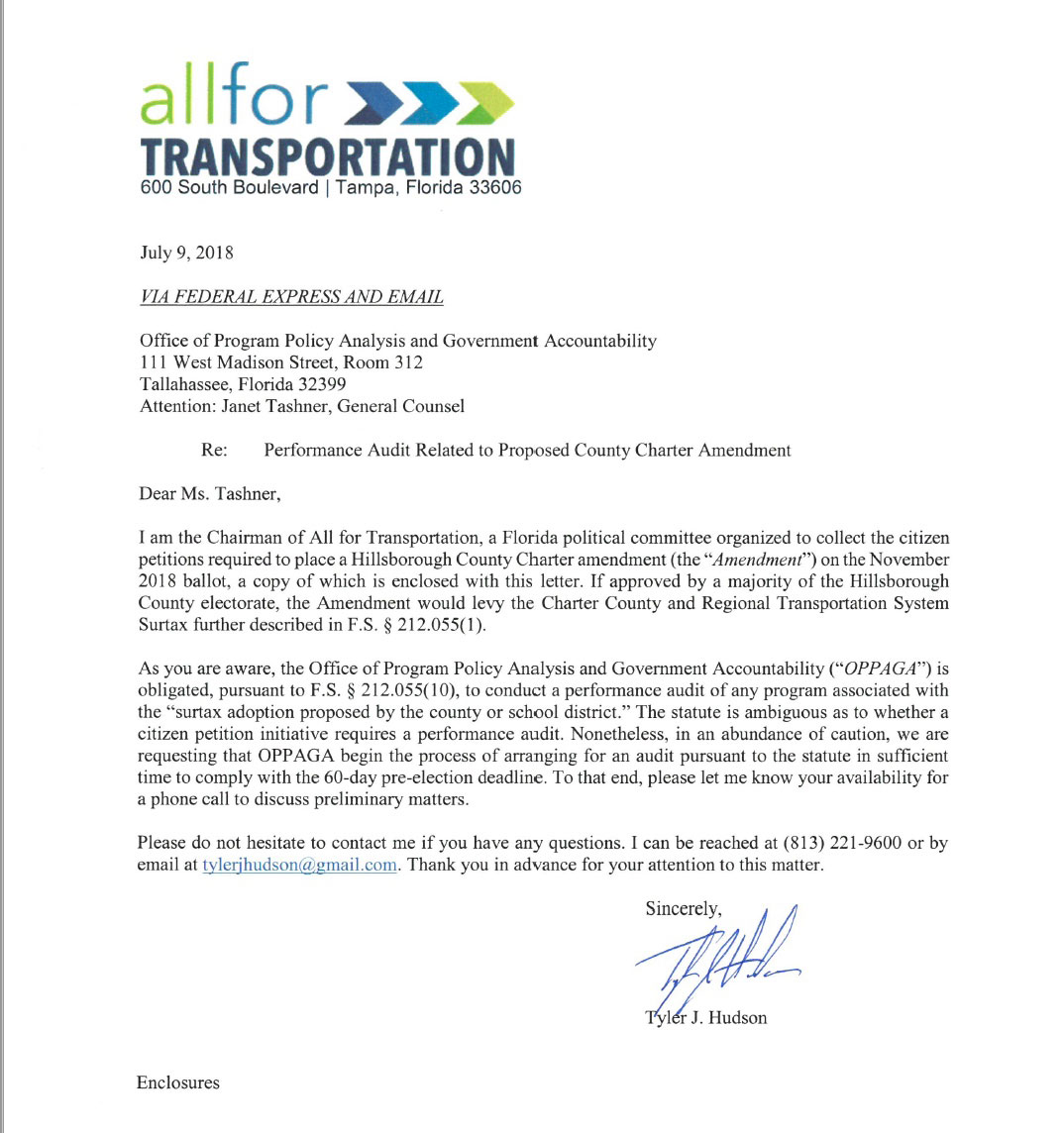 On July 9, 2018 AFT informed OPPAGA of their citizen petition effort to put a transit sales tax hike referendum on the November ballot. AFT requested “that OPPAGA begin the process of arranging for an audit pursuant to the statute in sufficient time to comply with the 60-day pre-election deadline.

We have seen no update reporting from the Times regarding AFT requesting the performance audit on July 9.

AFT has a very compressed timeline, as its six-week petition drive ends this week. All petitions to be validated must be submitted to the SOE by Friday, July 27, 2018 at 5 p.m. The SOE has 30 days to complete their validation process.

It is reasonable to assume the SOE will certify to the Hillsborough county commissioners, sometime between Aug. 1 and the 30-day deadline of Aug. 27, whether the required number of valid petitions were submitted for the transit sales tax hike to be placed on the November ballot.

But then there is also the performance audit requirement.

Hillsborough County School Board was told it may take six months to complete an audit for them. Is it possible OPPAGA can complete the required audit for this petition’s proposed massive sales tax hike in five weeks or less?

Back in October 2015 during the Go Hillsborough debacle, the county had requested a sheriff’s investigation of how Parsons Brinckerhoff (PB) received their no-bid county contract to conduct that tax hike campaign. The commissioners also requested their internal auditor conduct an audit of the CCNCA procurement process used to award PB the contract.

This proposed transit sales tax hike is a $15-18 BILLION initiative that funds multiple programs in multiple organizational entities. The petition is not simple. It is five pages of legislative regulations and bureaucratic specificity that would be placed in the county’s governance document — the County Charter — for 30 years if passed. Therefore, how complex or comprehensive will the performance audit be?

Remember AFT decided to ram a normal six-month citizen petition drive process into a six-week petition drive. Their decision to use such a compressed timeline was theirs. They could have completed their petition drive last year or months ago.

We doubt anyone can request OPPAGA somehow provide preferential treatment to complete their required audit to meet the Sept. 6 pre-November election deadline.

We know Hillsborough County must be audited for this proposed transit sales tax hike because it is a county-levied tax. That is a good thing. We always wanted an independent audit done before there was ever another proposed countywide tax hike referendum placed on a ballot.

So kudos to the state Legislature for requiring the performance audit and requiring the results be transparently displayed to the public 60 days BEFORE the election. Voters must be informed and taxpayers must be protected.

AFT must first submit the required number of valid petitions by July 27 at 5 p.m.

If it doesn’t, the audit is a moot point because the tax hike will not be on the ballot.

If it does, the completion of the performance audit by Sept. 6 will become a critical path to actually getting AFT’s massive 30-year 14 percent transit sales tax hike on the ballot.

Sharon Calvert is a conservative activist and with her husband, Mark, write the blog Eye on Tampa Bay. This story was reprinted with permission from Tampa Bay Beat.

Hillsborough County Makes Security A Priority With By Mail Voting