Prior to February 14, 2018, more than half the people in Florida knew the states gun laws. That all changed when 17 people were killed at the Marjory Stoneman Douglas High School lost their lives after they were gunned down with an AK 15 assault rifle.

Now almost everyone in the state, the country and worldwide know the students of what has become #MSD and they are aware of what is going on in Florida’s Capitol of Tallahassee as lawmakers are on the front lines of the passionate battle for gun regulations.

The House Appropriations Committee today rejected a proposal to outlaw the sale and possession of about 200 types of semi-automatic rifles. As expected the vote nearly on party lines was 18-11. Eighteen Republicans voted no; 10 Democrats and one Republican, Rep. Bill Hager of Boca Raton, voted yes.

The House vote came just hours after a vote of 7-6 came after a similar ban Monday by the Senate Appropriations Committee and it was roundly condemned by students with their parents in the gallery.  The Republican-controlled panel also voted down a Democratic amendment that would remove a program to arm teachers in Florida. That vote was 18-9.

Early today a Florida House committee approved a bill that would raise the minimum age to buy rifles from 18 to 21 and creates a three-day waiting period for all gun purchase but does not close the gun show loophole.

Meanwhile, there is major controversy as the bill would also create a program that allows teachers who receive law enforcement training and are deputized by the local sheriff’s office to carry concealed weapons in the classroom if also approved by the school district.

Democratic Rep. Jared Moskowitz, a former Parkland vice mayor, said he didn’t like the bill, but still voted for it. He explained, “It doesn’t go far enough, and now it goes too far in other areas. But the NRA opposes it and I will not vote with the NRA.”

At this point whatever is passed in the Florida Legislature is likely to fall far short of expectations. 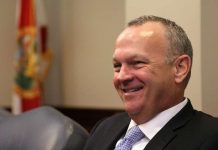