The Florida Legislature took its first steps today in an effort arm qualified teachers with guns. It is a move that is opposed by every local regional, national teaching, and police organization but the state lawmakers are willing to try to make it the law in Florida.

But this is a signature bill for The Speaker of the House Republican Richard Corcoran from Land O Lakes just north of Tampa. He is seeking the Republican nomination for governor and is a strong supporter of President Donald Trump while outgoing Gov. Rick Scott has had many battles with Corcoran.

The real guts of the bill look like this – There would be $67 million allocated for a “school marshal” program. This is where things become controversial starting with a three-day waiting period for gun purchases.

Next the state law would buck the NRA as it would raise the age to buy any gun from 18 to 21. That could be the bone in this deal for the school kids from Marjory Stoneman Douglas High School who have been putting pressure on the state lawmakers to enact tougher gun laws.

Meanwhile, the bill would also give police more power to seize guns from people who threaten themselves or others. That is a point that could draw interest from those strong civil libertarians.

Most of the money for the marshal program would be spent on training teachers and others who would serve as protectors of the schools.

At this point, the bill is very vague on a key point. Would the state give guns to teachers or would have to buy them? That point may, in the end, fall to the local school boards and superintendents for them to make the choice.

According to the proposed new law, the hope is to have 10 marshals (teachers trained to carry a gun) in every school, which would equate to 37,000 statewide. The state would cover the costs of background checks, drug testing, psychological exams and 132 hours of training. The bill does provide a one-time $500 stipend for those who volunteer to have a gun.

Another element of the proposed new law would allocate $400 million to put a school resource officer in every school, improve mental health counseling and make public school buildings safer.

For the record, the plan on the table in the Florida Legislature used a template from Lakeland. The program has been set in motion in Polk County schools by Polk County Sheriff Grady Judd, who said that arming trained teachers is more cost efficient than the cost of hiring enough armed school resource officers in each school. 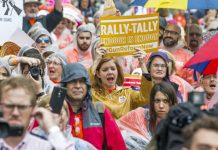