Someone connected with Miami-Dade County, Florida thought a deal to sell the naming rights of the Miami Heat’s home arena to the cryptocurrency company FTX was so good, that it had to be signed. It ended up being a 19-year, $135 million deal with Miami-Dade County receiving $97 million and the basketball franchise getting $38 million over the life of the deal. FTX filed for bankruptcy on November 11th and Miami Dade County has been left holding the bag. Miami-Dade County has requested that a federal bankruptcy court allow them to terminate its naming rights agreement with FTX and remove the brand’s logo from the arena.

Miami-Dade County officials want out immediately because of what the county’s lawyers’ termed “enduring hardships”. Additionally the lawyers stated. “It does not appear that the Debtor will suffer harm from a termination of the Naming Rights Agreement. On the other hand, Miami-Dade County continues to supply valuable marquee naming rights and other benefits to the Debtor, to the detriment of the County’s ability to seek a new naming partner for the Arena.” There will be a hearing on December 16th on the matter. After FTX filed for bankruptcy protection, a judge issued a stay order that prevented any entity from acting against the company. FTX has paid Miami-Dade County almost $20 million, and has a $5.5 million payment due in January. In 2021, FTX signed marketing partnership agreements with Major League Baseball, the NBA’s Golden State Warriors and the Washington Wizards, along with the NHL’s Washington Capitals, the WNBA’s Washington Mystics and esports’ TSM. FTX founder Sam Bankman-Fried is being investigated by the Department of Justice and the Securities and Exchange Commission for allegedly mishandling customers’ funds. 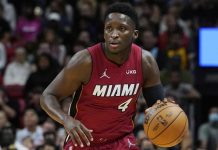