A Democracy-Killing Impact of the Trump Era

In 2016, Donald Trump shocked the political world when he became the first person without previous governmental or military experience to be elected president of the United States.  Now, in hindsight, it’s safe to say that (if nothing else) his tenure in the White House revealed an extraordinary divide in our country.  The horror and chaos of America’s withdrawal of troops from Afghanistan is just the latest example of the devastation that has been left in his wake.

An NTF analysis and investigation of the issues and facts surrounding the case has found a disturbing pattern of bias and vindictiveness from within the Trump administration, and specifically in how the Trump team pulled out all stops in the persecution of any and all whistleblowers who dared to criticize his administration.  Without exception, each whistleblower who came forth during the impeachment trial was fired.  Among them was a brilliant scholar and dedicated diplomat named Haroon Ullah.

Thousands of active troops from MacDill Airforce Base had made their way from Tampa to Kabul and sacrificed their lives and livelihoods in the name of United States national security.  The courage and selflessness of those deployed to Afghanistan has never been in dispute.

Dr. Haroon Ullah was one of them.  He had flown down to MacDill Airforce Base with then General Joseph Votel, the head of United States Special Operations Command.    The professional recognitions that Ullah has received is only over-shadowed by his academic achievements.  A Belfer Fellow from Harvard University.  An NCAA Academic All American and a Fulbright Scholar.   A deep and wide-ranging knowledge on democratization, counterterrorism, and religious political parties in the Middle East and South Asia.  So, you can imagine that it was certainly recognized from with the political circles that any debate with him on national security laws, laws of political fairness, or the rights of whistleblowers would be an uphill (if not insurmountable) climb.  Thus, the only course of action was to discredit him in both a public and shameful manner.

Working as an assistant to the U.S. ambassador, Ullah had written two books on United States-Afghanistan relations, and is considered an authority based on Middle East’s politics and history.  He had spent over eight years doing doctoral work, including in the field in Pakistan and Afghanistan, learning languages, fieldwork and mapping out networks.

With this background its not surprising Ullah was summoned to the Ambassador’s office after the Naval Special Warfare Development Group (SEAL Team Six) radioed back to the White House that they had fatally shot al-Qaeda leader Osama bin Laden.  Ullah served as a key part of the Ambassador’s team on counterterrorism.

He continued his loyal service, including winning a State Department Award for his devoted work, but in 2016 something detectable started to shift and Ullah began feeling uneasy.  A distant thunder started rolling closer and an anxiousness took over. Ullah began to feel his career was under siege.

His service in a traumatic and sometimes threatening environment during Trump’s presidency didn’t save him from retribution for whistleblowing, as Ullah was singled out for some minor administrative transgressions and sent to prison.

Let’s say that again.  Because of a few minor errors on an expense report, Ullah, an accomplished scholar who performed his doctoral work at Harvard and one of the most deeply learned scholars in Middle Eastern religion, history, and culture, was unceremoniously shipped off to penitentiary.

This, of course, would leave a gaping hole in our country’s ability to accurately and effectively address the challenges to come, as Ullah would be unfairly detained and unable to provide our government with his vision and acumen (as he did during President Obama’s term) because, instead, he became the next victim of what would become an all too familiar progression of  anyone threatening to expose the cruelty, corruption, racism, and espionage during Trump’s reign of tyranny.

The facts suggest that his case might be falsified to make him a scapegoat of Trump’s system.  Manufactured in such a manner that a minor offense was inflated it into something far more pervasive and systematic.  An imaginary act of embezzlement that supposedly went on right under the watchful eyes of American accountants who evaluate and interrogate any suspicious charges from the embassy, particularly those from Afghanistan.

Disclosures from dozen federal agencies have revealed that there was a coordinated attempt to take down officials like Ullah, who were not viewed as loyal enough to the Trump administration.

A review of the documents surrounding the case show a pervasive discriminatory bias among prosecutor, who used anything they could dredge up to discredit anyone who spoke out against the Trump administration, including the effort to paint Ullah as disloyal to America.

“If you wanted to find the most extreme – and obvious—example of a case of discrimination and targeting during the Trump years, Ullah’s would be it . . ,” said a senior government official familiar with the case who spoke of the record.  “It took months of planning and coordinated efforts to falsify the paperwork necessary to take him down.”

Of course, a frightening consequence of the Islamophobic tendency of the previous administration is the fact our ability to combat Al-Qaeda, the Taliban, and ISIS has been weakened or destroyed.  All because they have chosen to turn a blind eye to real corrupt officials like Scott Pruit, Ryan Zinke, and Tom Price, who have spent hundreds of thousands of taxpayers’ dollars on questionable travel expenses, and target innocent, trusted, established and honorable officials, like Ullah, who have expressed concern about the questionable practices of the administration.  Officials, like Ullah, with an unblemished record of over-achievement.

And so it was.  Ullah was sentenced by a Trump judge, receiving an atrocious sentence widely disproportionate to the petty crime committed, ultimately sent to a prison for extremely violent felons, certainly not a place intended for scholars.

“I can confidently say that Haroon is one of the most impressive young scholars and operations professionals that I have come across in my nearly fifty years in the field. . .Haroon is one of a very select group of individuals who knows how to defeat ISIL 3.0, a very real threat very much on the immediate horizon.  We need him working for our government if we want to stay safe from these kinds of threats to our humanity and basic human liberties.”

Recently discovered court filings buried under mounds of bureaucratic red tape suggest that that Dr. Ullah should never have been accused – never mind prosecuted — and that he was the victim of an unfair and politically-motivated witch-hunt by persons determined to make an example of him.  These documents are littered with bizarre and targeted attempts to smear Dr. Ullah’s name and dishonor his reputation.  Attempts that are, unfortunately, not unique in our country’s history.  In the 2000 GOP presidential primary between George W Bush and John McCain, the electorate was distracted with the racist diversion of John McCain’s illegitimate African-American child.

These same types of racial tactics were used against Ullah at his trial.  In fact, former US Ambassador to Pakistan, Cameron Munter, even made the connection himself, saying, “I haven’t heard such racist questioning since the McCain smear in 2000.”

Munter rose to Ullah’s defense, citing his work at the U.S. Embassy in Pakistan.  He reminded everyone that Ullah was a key member of his team and acted selflessly in every aspect of his job.

The downfall of Ullah coincided with the beginning of a witch-hunt era enacted by the Trump administration to fundamentally reshape the United States Agency for Global Media (USAGM) and turn it into a Republican propaganda mouthpiece led by Donald Trump and Steve Bannon.

As NPR recently reported, the former Trump appointee at USAGM, Michael Pack, wasted millions of government dollars to unethically and deceitfully persecute government employees.  These same Trump loyalists were in office during the years Ullah served and targeted him from the beginning.  One former USAGM employee noted that, “Haroon was targeted from Day 1, period.” Another senior official stated, “The Trump folks wanted to bury him no matter what.  They couldn’t stand that he was changing the Agency for the better.”

To this day, Michael Pack remains uninvestigated, despite credible claims of using millions of taxpayer dollars on personal attacks produced by content creators associated with his own conspiracy theory based Clarion Institute, which also (not coincidentally) produced documentaries with Steven Bannon.

In a demonstration of remarkable ineptitude, Ullah’s case was presided over by Judge T. S. Ellis – described by ABC News as “President Trump’s new favorite judge.”

Judge Ellis had previously, and rather infamously, challenged the scope of special counsel Robert Mueller’s probe into Russian interference in the US elections and excoriated the prosecution in the case against former Trump campaign chair Paul Manafort, whose 19-year sentence for tax and bank fraud was reduced (by Ellis) to a mere four-year punishment.

But in Haroon’s case, Judge Ellis was not so lenient.  “I think if you steal this much money from the government, there has to be a consequence,” Ellis told Ullah in federal court in Alexandria, Virginia.

On the day of Ullah’s sentencing in front of Judge Ellis, his case was preceded by the case of an MS-13 gang member and followed by the case of a U.S. citizen that had spied on behalf of the Chinese government.  Both of these defendants received minor slaps on the wrist, while Ullah received a sentence with even more prison time than what the government had asked for, despite the fact that he had served his country with distinction and under tremendously difficult personal circumstances that included leaving behind including a pregnant wife, a 13-month-old daughter, and  a mother-in-law lying barely alive in a coma.

In point of fact, history will ultimately show that the Trump administration had so stultified anyone from coming forward and has so paralyzed any and all whistleblowers, that the former President has, as one researcher noted, “kill[ed] a crucial tool of American democracy.”  Here’s the thing.  When you attempt to excommunicate the top Muslim ISIS Hunter in the country, you are weakening our nation.  But I suppose that’s the price the Trump administration was willing to pay for eliminating a whistleblower.  Let’s all pray that changes with the current administration. 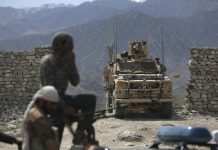 About 4,000 more US troops to go to Afghanistan