After 146 years the circus will come to an end the “Greatest Show on Earth.” The Sarasota based company has been the home to the circus since the 1920’s and many members of the community will be watching tonight.

This weekend is the final chance for fans to see the Ringling Brothers and Barnum & Bailey Circus. According to Associated Press the Ringling’s parent company, Feld Entertainment, announced in January that it would take its final bow this year.

Feld executives called a press conference in Sarasota earlier this year to announce that because of declining attendance combined with high operating costs are among the reasons for closing.

“This was a difficult business decision to make, but by ending the circus tours, we will be able to concentrate on the other lines of business within the Feld Entertainment portfolio,” Juliette Feld, CEO of Feld Entertainment, said in a statement. “Now that we have made this decision, as a company, and as a family, we will strive to support our circus performers and crew in making the transition to new opportunities.”

One reason not mentioned was that there were costly legal battles with PETA and other animal rights groups led protests against the circus. Then there was pressure coming from state and local laws placed national media bright lights on the company’s use of exotic animals, and the company ended its elephant act last May.

The company ran two touring circuses this season, one of which ended its run earlier this month in Providence, Rhode Island. 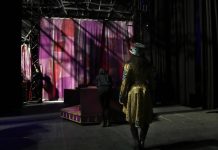 AP Exclusive: The last days of the Ringling Bros. circus