There is nothing like campaign season to cause white politicians to magically get the black Holy Ghost.

Every church they can find, they are in it! Worshiping and talking to Jesus and singing old Negro spirituals like they themselves were raised on the plantation.

Only, once campaign season is over, those congregations never see or hear from those politicians again.

Well, not until the next election cycle rolls around.

Take Philip Levine, who is running for Florida governor.

He has tweeted out photo after photo of him in black places of worship along the I-4 corridor. 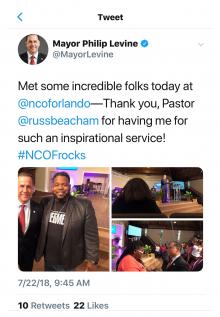 I’m expecting him to start rolling around on the floor, speaking in tongues in a minute.

Yet, I’ve not seen one photo of Levine campaigning in a synagogue (he’s Jewish) or a Catholic Church.

Why is it that black voters are thought to adhere to the pied piper syndrome?

Why do white politicians think we are rats, to be led to the polls by a flute-playing person, to vote for them?

This doesn’t happen in ANY other demographic.

Other houses of worship get the respect of not having their time interrupted.

Not black folks. Our religious leaders get offered money to “lead the flock one way or another.”

Don’t say it doesn’t happen, because it does. 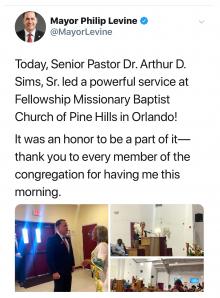 These politicians get one person to act like the “coyote” of immigration, and transport them into the churches, where they go all “Hallelujah and praise the Lord.”

Do black congregations still fall for this tomfoolery?

They have to know that if a politician isn’t a year-round black church-goer, this person is just using the church to get what he or she wants at the moment, and that’s the black Vote.