A wish list the company submitted to New Jersey gambling regulators was obtained by The Associated Press. The partially blacked-out copy offers the first look at proposals the Florida-based company has for the shuttered Atlantic City casino that now-President Donald Trump built.

Hard Rock bought it in March for $50 million from billionaire investor Carl Icahn. That’s about 4 cents on the dollar from the $1.2 billion Trump spent to open it in 1990.

At a major casino conference last month in Atlantic City, Hard Rock chairman Jim Allen said his company had sent a letter to the state Division of Gaming Enforcement outlining plans it has for the Taj Mahal remake that it wanted to discuss with gambling regulators.

In response to a request under New Jersey’s Open Public Records Act, the division provided The Associated Press with a partially redacted copy of the letter, with portions blacked out that included “trade secret, proprietary commercial or financial information,” which are exempt from public disclosure requirements.

Allen did not return messages Thursday and Friday seeking comment.

The company also plans new slot products not currently available in New Jersey, but state regulators blacked out details. One of the proposals includes technology designed to increase the amount of time customers spend on the device.

Another includes offering gambling in areas off the casino floor “for traditional gaming or other types of gaming, i.e. sports, skill-based gaming, etc.”

Some of the proposals are not new; the Tropicana has slot machines in its shopping-dining area called The Quarter, and Caesars Entertainment recently experimented with skill-based slot machines at its three Atlantic City properties.

The state also is trying to overturn a federal prohibition on sports betting.

In addition, Hard Rock is asking for the right to host casino tournaments or promotions without notifying the Gaming Enforcement division five days in advance. 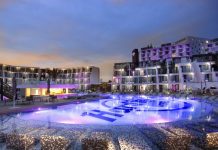