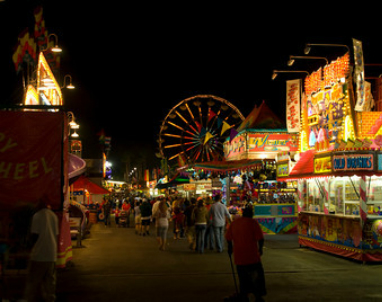 TAMPA, Fla. (AP) — The livestock barns are set up. The judges are anticipating the baking competition and the rides are ready to provide thrills.

The acts featured at this year’s fair include an acrobatics troupe, a comedy hypnotist, a show involving stunt dogs, racing pigs, a demolition derby and the Budweiser Clydesdales.

Members of the military and emergency responders get free admission, along with three other guests.

Here is the entertainment lineup at the fair.

February 7 – 12, 2019
Daily Showtimes: Noon, 3:00 & 6:00pm
Saturdays & Sundays: Noon, 3:00, 6:00 & 8:30 pm
Friday, Feb. 8 ONLY: Noon, 5:00 & 8:30pm
Location: Tampa Bay Times Stage
With their tight, four-part harmony and delightful antics, these musical comics have been Jay Leno’s opening act for the past seven years. Additionally, the Alley Cats have opened for Jerry Seinfeld, Joan Rivers and have appeared on numerous television shows for NBC, CBS, and PBS. The Alley Cats have performed in concert all over the world alongside iconic groups such as The Coasters, The Drifters, and The Beach Boys. Most notably, they were featured with Jay Black as The Americans on the television special Pop, Rock and Doo-Wop.

Known for his paint splashed style of large scale street art, Ryan ‘ARCY’ Christenson has been defining his skills for over a decade. ARCY has created hundreds of live murals and permanent large scale works throughout North America, Australia, and Europe. ARCY has worked for the likes of The Smithsonian Institute, Major League Baseball, America’s National Parks Service, and is currently developing a collaborative body of work for The Walt Disney Company as a Disney Fine Artist.


Renata is an American country/rock trio composed of siblings Collin (19), Adrienne (16) and Benny (13). Despite their young ages, these talented siblings are no strangers to the music business, having toured full time for the past 8 years. Their live show includes everything from Johnny Cash to John Mayer, in addition to their own original music. Currently living in Nashville, TN, the trio recently recorded and released their debut EP. With strong vocal and instrumental skills far surpassing their young ages, these three amaze audiences with their unique sound every time they step onstage.

FOR MORE INFORMATION ON ALL THE ENTERTAINMENT CLICK HERE