TAORMINA, Italy (AP) — Melania Trump’s first outing in the Sicilian sunshine was in a colorful floral applique jacket by Dolce & Gabbana that comes off the rack at $51,000.

Mrs. Trump also carried a matching clutch when she went to lunch with the other spouses of G7 leaders at the historic Elephants Palace hosted by Catania’s mayor.

The color burst comes after a steady wardrobe of mostly black during President Donald Trump’s overseas tour, including a prim black lace dress with a matching mantilla headcover that she wore to meet Pope Francis and a dark jacket with golden detailing on the cuff and collar that she wore for her arrival in Italy, both also by Milan designers Domenico Dolce and Stefano Gabbana.

Gabbana has been celebrating each appearance with Instagram posts. He shared three photos of the floral jacket, worn over a simple white shift dress, with the U.S. first lady looking model-perfect stepping out of an SUV. Gabbana tagged the photo with hearts and a Thank You to @flotus #melaniatrump.

Dolce & Gabbana have made Sicily their fashion muse, so it makes sense that she would also wear their designs in Sicily.

Thus far throughout President Trump’s first trip in trip abroad since taking office back in January of this year it has been his wife who has been a real hit.

Ms. Trump has been a quiet but strong presence for her husband. She and Pope Francis hit it off very well and she was a big hit in Israel. No first lady since Jackie Kennedy has had the fashion sense that Ms. Trump has displayed.

She has done a wonderful job of picking just the right outfit for each of the major meetings and has been the “Charmer in Chief,” when has needed to do so. No question that Ms. Trump has been the real winner on this trip for the United States.

She could be a secret weapon for the Commander in Chief. 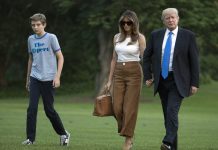 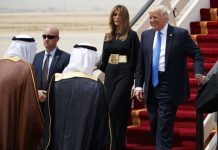