LONDON (AP) — With just 17 days to go, Britain’s departure from the European Union was thrown into chaos and doubt Tuesday as Parliament delivered a crushing double blow to Prime Minister Theresa May’s Brexit divorce deal and to her authority as leader.

Lawmakers rejected the deal 391-242, ignoring May’s entreaties to back the agreement and end the political chaos and economic uncertainty that Brexit has unleashed. It was a narrower outcome than the historic 230-vote margin of defeat for the agreement in January, before May secured changes from the bloc — but not by much.

Top EU officials warned that the defeat had increased the chances of a chaotic “no-deal” British exit, which could mean major disruption for businesses and people in the U.K. and many of the 27 remaining EU countries.

The stinging 149-vote defeat stripped away May’s control over the course of Brexit and handed it to Parliament, which is divided about what to do next.

A drawn and hoarse May admitted defeat — again — and confirmed that Parliament will vote Wednesday on whether to leave the EU on March 29 without an agreement. If that is defeated — the likely outcome — lawmakers will vote Thursday on whether to delay Brexit, something that needs to be approved by the EU nations too. 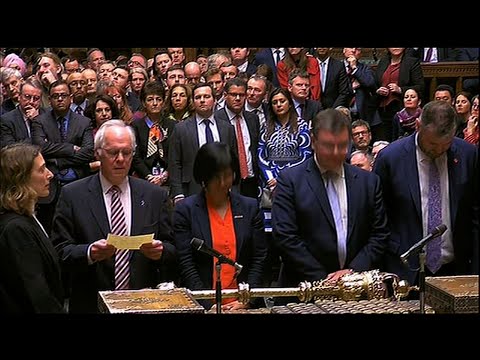 May warned lawmakers that “voting against leaving without a deal and for an extension does not solve the problems we face.”

“The EU will want to know what use we mean to make of such an extension. This House will have to answer that question. Does it wish to revoke (Brexit-triggering) Article 50? Does it want to hold a second referendum? Or does it want to leave with a deal but not this deal?

“These are unenviable choices,” she said.

The EU, which had warned there would be no more changes or negotiations if Parliament threw out the deal, expressed exasperation at yet another Brexit crisis.

In a statement, the European Commission said the member states “have done all that is possible to reach an agreement.”

“If there is a solution to the current impasse, it can only be found in London,” it said, adding that “today’s vote has significantly increased the likelihood of a ‘no-deal’ Brexit.”

European Parliament Brexit coordinator Guy Verhofstadt tweeted: “Brexit was about taking back control. Instead the UK spiralled out of control.”

The mechanism, known as the backstop, is a safeguard that would keep the U.K. in a customs union with the EU until a permanent new trading relationship is in place. Brexit supporters in Britain fear the backstop could be used to bind the country to EU regulations indefinitely.

May said documents to be added to the deal provided “legally binding” assurances that the backstop would be temporary and that Britain would have a way to get out of it if the EU failed to negotiate in good faith. However, the text of the 585-page withdrawal agreement remained unchanged.

May’s hopes the concessions would be decisive were dashed when Attorney General Geoffrey Cox said the changes “reduce the risk” Britain could be trapped inside EU regulations — but do not eliminate it.

In a written legal opinion , Cox said the U.K. could still not extract itself from the terms of the divorce deal unilaterally, a key demand of pro-Brexit British politicians. Afterward, hard-core Brexit supporters in May’s Conservative Party and the prime minister’s allies in Northern Ireland’s Democratic Unionist Party both said they could not support the deal.

The DUP, which props up May’s minority government, said “sufficient progress has not been achieved” on the key issue of the Irish border.

The European Research Group of pro-Brexit Conservatives, which has dozens of lawmakers as members, said the amendments “do not deliver ‘legally binding changes’” to the withdrawal agreement, as the government promised.

Other EU nations had urged British politicians to seize the chance to back the deal and ensure an orderly departure.

Delaying Brexit, the path Britain looks set to take, would need the approval from all 27 remaining EU countries. The EU Commission said it would “expect a credible justification” for the postponement.

Some British lawmakers had warned their Brexit-backing colleagues that rejecting the deal could lead to Britain’s departure being postponed indefinitely, because a delay would give momentum to opponents of withdrawal.

“Today is our Hotel California moment. If we don’t check out tonight, we may never leave,” tweeted Conservative legislator Bob Seely.

The government’s defeat will embolden politicians calling for a second referendum on whether to leave the EU or remain, though there is no clear majority in Parliament for that course.

It has also increased the chances that May’s fragile government could fall, sparking a snap election.

“The prime minister has run down the clock and the clock has been run out on her,” said Opposition Labour Party leader Jeremy Corbyn. “It’s time that we have a general election and the people can choose who their government should be.”

More than two and a half years after the country voted to leave the EU — and with no certainty about when or how it will — many Britons are simply fed up.

In the staunchly pro-Brexit port of Dover in southern England, retiree Mary Simpson said she felt her voice as a “leave” voter had not been heard.

“I am actually considering never voting again, quite honestly, because I am beginning to feel that there is no point in it,” she said.