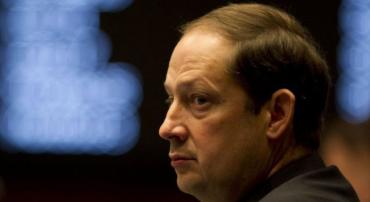 Joe Negron’s escape from the Florida Legislature to a private fortune he negotiated on the taxpayers’ dime is out in the open now. Reporter Matt Dixon laid it all out nicely for us in Friday’s POLITICO Florida.
Because of redistricting, the former Senate president could have run for another term in the Legislature. The fact he chose not to is no crime. But to hear Negron tell it, so imbued with a sense of righteous principle was he, he just couldn’t burden the good people of Florida any longer.
“I have always been a big believer in term limits,” he said in a written statement last May. “… I believe in a citizen Legislature where women and men from all walks of life serve for a reasonable period of time and then return to the private sector,” he said. What a guy.
Except, now we find opportunity may have knocked a little earlier than Negron admits. GEO Group, the private prisons people, announced on Nov. 29, same month he left the Senate presidency, that they’d hired him as general counsel.

How good a deal was it?
Negron got a two-year contract out of the gate, but it includes options for a “continuous ‘rolling’ two-year term until the age of 67 years,” according to the quarterly report filed with the Securities and Exchange Commission.”
Last December when POLITICO reported Negron’s hire, GEO would not discuss terms of the employment agreement. Negron replaced John Bulfin, who had an annual salary of just over $500,000 and an overall compensation package worth $2.5 million.
Here’s the rub POLITICO’s Dixon points out: The Senate president was a big part of framing the current state budget, in which lawmakers sunk a $4 million increase in funding to companies that operate Florida’s private prisons. GEO Group operates five.
Reports Dixon, “Negron also helped secure $2.9 million in last year’s budget for GEO’s Continuum of Care, the provider’s offender rehabilitation program. The money allowed GEO Group to expand the program to facilities beyond Jackson County’s Graceville Correctional Institution, which had been the only one to offer it.”
It runs deeper than GEO’s 2018 quidding for Negron’s quoing. GEO was actually pushing the Senate president-to-be two and three years earlier. On Aug. 15, 2016, I wrote, “GEO, second largest private prison vendor in the country, contributed $288,000 to the Negrons during this election cycle — more than a quarter million dollars.”
Of the $288,000, some $43,000 went to the (unsuccessful) District 18 congressional campaign of Rebecca Negron on two separate days in 2015 and 2016. On June 22, 2016, presumably to please Negron, GEO lavished another $50,000 on the super PAC that supported her, Conservative Congress Now!
That was an important time for Boca Raton-based GEO Group. At least one of its five contracts, for Moore Haven Correctional Facility, was due to be awarded through open competitive bid processes through the Florida Department of Management Services during Negron’s presidency.
Guess what company won the bid?
On Aug. 9, 2016, The Miami Herald reported GEO had parsed out $628,500 to mostly Republican candidates and committees. Which, by the way, included $150,000 to the Florida Republican Senatorial Committee, the group that coordinated GOP state Senate races — and Negron controlled.
Taking contributions from entities with business before the Legislature is one thing. It’s how sausage is made in every statehouse in the land. But systematically helping those firms so you can sign on with them later, so you can win a ticket to Millionaire’s Row? Unconscienable and criminal and, frankly, disgusting. Not easy to prove, I admit. But in the case of Joe Negron, a powerful president of the Florida Senate, somebody ought to try. For the integrity of the office, if nothing else.
Reach Nancy Smith at nsmith@sunshinestatenews.com or at 228-282-2423. Twitter: @NancyLBSmith