OCALA, Fla. (AP) — A north Florida man has been indicted after federal prosecutors say he planned to place bombs on the shelves of Target stores in an attempt to drive the company’s stock price down.

Acting United States Attorney W. Stephen Muldrow says 49-year-old Mark Charles Barnett was indicted Thursday on five counts including attempted arson, possession of a destructive device and other charges. He faces a possible life sentence in federal prison if convicted of all counts.

Barnett’s indictment says he had purchased options on Target stock that would pay out when the price dropped. 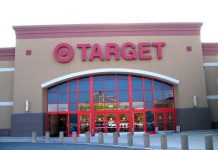