Mexico will elect a new president on July 1, and the current polls have Andrés Manuel López Obrador, frequently called AMLO, poised to win the race. So, who is this man, whom many call the “Bernie Sanders of Mexico”?

This will be the third bid for the presidency for López Obrador, 64, who previously served as mayor of Mexico City from 2000 until 2005, when he entered his first run for the presidency. He narrowly lost in 2006, and then lost again by a larger margin in 2012, and in both cases refused to concede the election, alleging electoral fraud.

Although he is a career politician, López Obrador is running on a similar thread as U.S. President Donald Trump did — the anti-establishment candidate representing those who are dissatisfied and fed up with the current ruling party, and feel the government has long forgotten about them.

“He’s successfully taken advantage of a sentiment in Mexico, one where the economy is lagging and the government is corrupt,” Duncan Wood, the director of the Wilson Center’s Mexico Institute, told The Daily Caller News Foundation. “He’s seen as an alternative, as someone who offers a different approach.”

The current ruling party, the Institutional Revolutionary Party (PRI), has ushered Mexico through a period of record violence under President Enrique Peña Nieto, with an estimated 102,859 homicide cases registered since he took office in 2012.

“All of Mexico, including even the businessmen, including bankers, want change. They all want change. And he represents that change,” Elena Poniatowska, a Mexican journalist and author, told the Financial Times. “Many people don’t even want to vote for López Obrador. I think what they want is for the PRI not to remain in power.”

While he represents a similar desire for change, Wood tells TheDCNF that López Obrador, of all the candidates in the race, will be the least likely to cooperate with Trump or the U.S., especially if the aggressive attitude coming from Washington continues.

This is something politicians have predicted. Republican Sen. John McCain of Arizona warned against Trump’s harsh rhetoric toward Mexico and its presidential election at a senate hearing in 2017, saying, “if the election were tomorrow in Mexico, you would probably get a left-wing, anti-American president of Mexico. That can’t be good for America.”

Nieto and his center-right government have accused López Obrador and MORENA of being radical populists who intend to turn Mexico into another Venezuela, and many in the U.S. refer his style and policies to the likes of Democratic Sen. Bernie Sanders of Vermont.

López Obrador began his political career in the PRI before leaving to begin MORENA, which began as a movement and then eventually formed into a coalition political party of the socialist Labor Party (PT) and right-wing Social Encounter Party (PES).

López Obrador’s populist agenda and calls to end the systematic violence in Mexico have provided him with a solid standing among younger voters, who have grown up in the most violent of times, as well as Mexico’s poorer, more rural citizens, who feel they’ve been slighted by the corruptness of the government. He frequently describes the political elites who have been ruling for decades as the “mafia of power.”

Speaking in rural Iguala, Mexico, in early June, López Obrador rattled off a laundry list of progressive promises to voters, saying he’d take less than half the salary that Nieto takes, he wouldn’t live in the official palace of Los Pinos, he would announce plans to sell the presidential jets (to Trump, he joked) and that he’ll slash the wages of senators and use the extra money to increase wages for teachers, nurses, soldiers and police officers.

Wood warns, however, that López Obrador will be less of a change-agent, progressive president than his adorers are hoping for.

“He’s less interested in a system of checks and balances,” Wood told TheDCNF. “He wants a system where the guy at the top is able to determine the outcomes as much as possible.”

Some Mexican voters also feel he doesn’t bring enough of a progressive agenda, saying he’s weak on environmental issues and quiet on gay rights, according to The New York Times.

After Trump won the presidency in the U.S., López Obrador published a book titled “Oye, Trump,” which blasts the president’s “xenophobia” and lists proposals to defend illegal immigrants in the U.S.

“Trump and his advisers speak of the Mexicans the way Hitler and the Nazis referred to the Jews, just before undertaking the infamous persecution and the abominable extermination,” the book reads, reciting a speech from López Obrador.

López Obrador pledged to turn the 50 Mexican consulates in the U.S. into “procurators” for the defense of migrants in a debate at the end of May.

“Very soon, with the triumph of our movement, we’ll defend migrants from Mexico, Central America and the whole continent and all migrants from around the world who need to leave their towns to go and make their life in the U.S.,” he told a rally in the city of Culiacán, Mexico. “It’s a human right we are going to defend.”

López Obrador took heat at the end of 2017 when he told the crime-ridden town of Guerrero he would consider amnesty for members of criminal gangs, including drug cartel bosses, as a way of reducing violence in the country, according to Reuters.

“You can’t fight fire with fire,” he said in terms of handling such criminals, in a recording published by newspaper El Universal.

Opinion polling by Consulta Mitofsky has López Obrador holding 37.7 percent of all support from voters as of Sunday. There are no runoff votes in Mexico’s election, so a president will be picked on July 1, regardless of majority.

Nearly half of the eligible voters in the election are under the age of 39, and they make up the cohort most frustrated with the state of the country. As López Obrador continues to align himself as the anti-establishment and change-making candidate, he has the potential to score that large chunk of the vote. 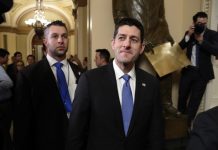 Trump Is Upset Congress Failed To Pass an Immigration Law.

Biden and DeSantis join together in Ian recovery effort

Over 2 Million Refugees Have Fled From Ukraine Amid Invasion, UN...