After Hurricane Irma left Florida, this morning more than13 million homes and businesses from Key West to Jacksonville are without power. Utility crews from as far away as Pennsylvania are on their way to the Sunshine State to deal with the outages.

That is a grand total of 1.15 million Bay area households, or 61 percent, without power as of this morning. The really bad news is that in some areas of the Tampa Bay region, power might not be back for more than a week.

Breaking down the area About 1.2 million Duke Energy Florida customers lost power, with Pinellas County hit hardest. They are working hard to restore power as around 420,000 Duke customers were hoping to get power back soon.

Speaking to the media Harry Sideris, president of Duke Energy Florida, said 9,000 extra utility workers have been dispatched to the company’s service area of 35 counties. Of those, 3,000 are dedicated to Pinellas County.

“We have an army of people coming here,” Sideris promised.

Cherie Jacobs, the spokeswoman for Tampa Electric said that the largest number of those without power were in the eastern part of Hillsborough and all of Polk County where at the moment there are 207,316 people were left without power.

For those without power, we recommend that you check in with the websites of the key energy companies in the region. Those big three are DUKE ENERGY, TAMPA ELECTRIC, and FLORIDA POWER.

All three major power companies are mobilizing to try and fix the power outages as soon as possible. But it will take time as they work their way through each neighborhood one at a time. 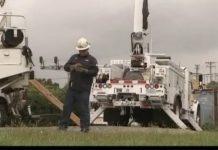