NEW YORK (AP) — Ariana Grande Grande, who reportedly is in Boca Raton, Florida with her family, has kept a low profile since Monday’s blast, which killed 22, including an 8-year-old girl. She took to Twitter afterward to say she was “broken” and “i don’t have words.”

Her team has decided that  canceled concerts in London and several other European cities and suspended her world tour to “further assess the situation and pay our proper respects” to victims of the bombing tragedy in Manchester, England, her management team said in a statement Wednesday.

“We ask at this time that we all continue to support the city of Manchester and all those families affected by this cowardice and senseless act of violence. Our way of life has once again been threatened but we will overcome this together,” the statement said.

Back in Manchester, the suspect who detonated a suicide bomb near one of the exits has been identified by police as Salman Abedi, 22. The ISIS state has claimed responsibility for the attack.

Shortly after Monday’s explosion, Grande reached out to longtime friend and Boca Raton resident Misha Lambert, whose father, songwriter Dennis Lambert, reported that “no sooner had I heard the first reports when my daughter Misha called to say she was in touch with Ari and all of her people are safe and unhurt.”

Meanwhile, Wednesday at Boca Raton Airport Grande returned to her home with family by private jet.  Sources from People magazine reported that as she departed the private jet, the 23-year-old singer “looked distraught and like she has been crying. They all hugged for a while before they headed to a waiting car.”

The pop star’s shows on her Dangerous Woman tour are cancelled and as of now there is no hard time line for Grande will return to Europe. For now she is expected to stay put at her Boca Raton home. 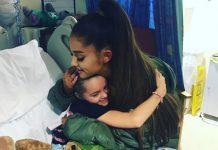 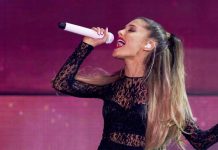 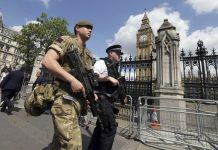