TALLAHASSEE, Fla. (AP) — A leading Democratic legislator in Florida abruptly resigned Friday, just hours after a news outlet reported that he had an extramarital affair with a local government lobbyist earlier this year.

Sen. Jeff Clemens, who had been in line to take over as Senate Democratic leader late next year, said he had made mistakes that he was ashamed of.

“For the past six months I have been focused on becoming a better person,” Clemens said in a statement. “But it is clear to me that task is impossible to finish while in elected office. The process won’t allow it, and the people of Florida deserve better.

“All women deserve respect, and by my actions, I feel I have failed that standard,” Clemens added. “I have to do better.”

It’s the second time this year that a Florida state senator has been forced to resign due to a scandal. Sen. Frank Artiles, a Miami Republican, resigned after using the N-word in front of two black colleagues

Clemens’ sudden departure is a blow for Florida Democrats, who had been celebrating that they won the September special election to replace Artiles. Clemens’ resignation came hours before Democrats were scheduled to hold a three-day state conference in Orlando.

Politico Florida first reported on Friday that the 47-year-old Clemens acknowledged the affair and had apologized for it. The news outlet also reported that the lobbyist informed Clemens’ wife of her affair with the legislator. The story also said Clemens had discussed the affair with two other senators, including Sen. Jack Latvala, a Republican who is running for governor.

After the story was published House Speaker Richard Corcoran, a Land O’Lakes Republican, quickly criticized the affair and said he was “greatly disturbed by it.” In a statement Corcoran maintained that because a lobbyist is dependent on legislators, “the facts here raise a very real question of sexual harassment.”

“I’m disappointed in the response of the senators who were aware of the situation,” Corcoran stated. “Rather than addressing the wrongdoing, they seemed to have formed a wall of silence. An apology is not the same thing as accountability.”

Senate President Joe Negron, a Stuart Republican, said after Clemens resigned that “it is clear to me Senator Clemens made a decision he feels is best for both his family and his constituents.”

Clemens, a former mayor of Lake Worth, has been in the Legislature since 2010 and was elected to the state Senate in 2012. He has been an outspoken critic of Republicans, including Gov. Rick Scott. 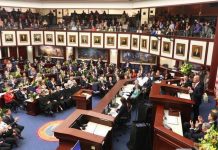