Might NFL players find a new means of protest?

PHILADELPHIA (AP) — Now that the NFL is drawing the line against players kneeling during the national anthem, athletes protesting police brutality and racial inequality may need to find a new playbook.

The question is whether they intend to escalate their protests in some way.

“The owners can try to prevent kneeling, but they open another can of worms,” said Randal Maurice Jelks, professor of African and African-American studies and history at the University of Kansas. “Imagine if players decide as a team to not come out for the national anthem. Or if one-third of the team decides not to come out.”

Hoping to quell the furor started by quarterback Colin Kaepernick two years ago, the NFL announced Wednesday that players can stay in the locker room during “The Star-Spangled Banner” but must stand if they venture onto the field. Not doing so will result in a fine against the team.

The decision was lauded by President Donald Trump, who suggested Thursday in a Fox interview that “maybe you shouldn’t be in the country” if you don’t stand for the anthem.

While NFL players who have supported kneeling in the past have not revealed their plans for this season, it is unlikely the new policy brought an end to the controversy.

“There were a lot of players who thought they could work with the league,” said Rashad Robinson, executive director of Color of Change, a social justice organization that mobilized members to boycott the NFL and its corporate sponsors last season. “Players will have to make a decision about whether they speak out. These owners are not just trying to keep the league without controversy — they’ve picked a side.”

Like protesters before them in past social movements, the players face a familiar dilemma: What to do when their public platform is taken away?

From the American Revolution through the civil rights era and, more recently, the Black Lives Matter movement, history has shown that when one avenue of protest is taken away, activists often move on to other — sometimes more disruptive — methods of protest.

Denver Broncos linebacker Brandon Marshall, who attended the University of Nevada with Kaepernick and was among the first NFL players to join in the national anthem protests two seasons ago, said players don’t care about teams being fined.

But as for what he intends to do this season, “I guess we’ll cross that road when it comes.”

He called the president’s remarks “disgusting” and said that while he doesn’t like the league’s new policy, he understands it.

“We’ve got freedom of speech, right? Freedom to protest? Just because somebody disagrees or has an issue with something that’s going on in this country, that doesn’t mean that they should pack up and leave,” Marshall said in response to Trump’s comments.

Detroit Lions wide receiver Golden Tate said he expects the team will discuss “a solution to stand for justice in America.”

“We’ve got time to kind of brainstorm some ideas on how we could stand for justice and what we can do,” Tate said.

During the Black Lives Movement, activists held protests that disrupted major thoroughfares and other public spaces across the country, then expanded their focus to local elections and working with the Obama Justice Department to bring about police reforms.

DeRay Mckesson, who began protesting as part of the Black Lives Matter movement in 2014 and has continued to push for police reforms, said NFL players now find themselves in a similar position, and he hopes they fight the new policy.

“The attempt is always to silence and erase,” he said. “The point of protest is to bring public awareness to things people want to keep private.” 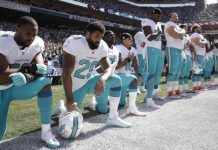