The entire institution of the press is under fire once again after the White House Correspondents’ Dinner, wherein comments about Sarah Huckabee Sanders have drawn a fair amount of controversy.  Has the press gone too far?  Is that even possible in a country that has always valued the freedom of the press?

Listen to the clip on SoundCloud here.

Former chairman of the Florida Republican Party Jim Greer joined Chris Ingram to voice his distaste for the Correspondents’ dinner, and he suggests that the media may have gone beyond the pale of a free press.  The question for the audience:  Does political correctness apply to those who campaign against political correctness on a regular basis?

Chris also asks Jim about actions out of the White House in recent days and weeks.  Foreign policy looms large, as positive signs between North and South Korea emerged over the past two weeks.  They talk about how much credit President Trump deserves for this progress and what might come next as talks move forward. 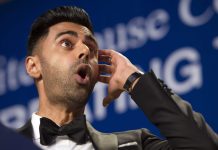