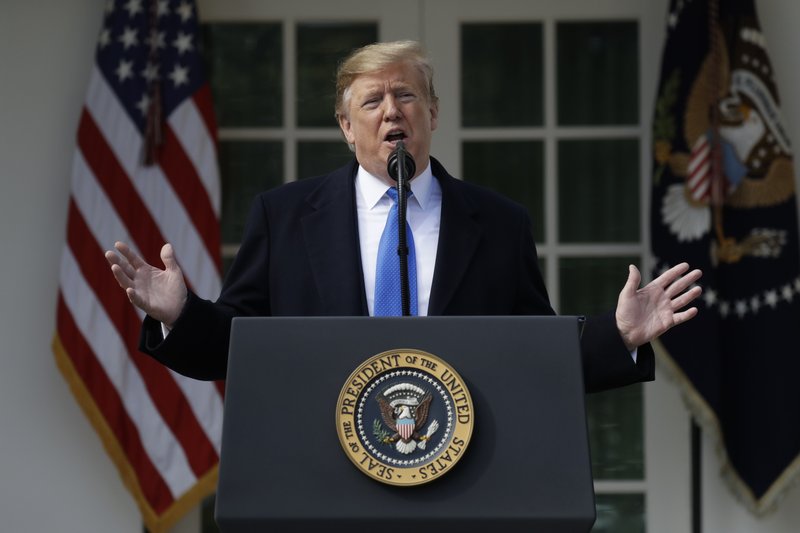 WASHINGTON (AP) — The fight over President Donald Trump’s U.S.-Mexico border wall is heading to the GOP-controlled Senate, putting Republicans in the uncomfortable spot of deciding whether to back his declaration of a national emergency.

Florida Sen. Marco Rubio is not up for re-election in 2020, but he hails from perhaps the nation’s swingiest presidential state. He lost the GOP presidential nomination to Trump in 2016. And he’s told reporters he doesn’t think he can support Trump’s declaration.

“No crisis justifies violating the Constitution,” he said.

Enough Republicans are chewing over whether to support Trump’s plan to create suspense about the vote and how the issue will play in the 2020 elections. Their objections range from constitutional to pragmatic, with many seeing Trump’s plan as a slap at Congress’ control over federal spending. Sixteen states have already sued.

And no Republican wants the next Democratic president to mirror Trump’s emergency declaration to unlock big taxpayer money for new climate or gun policies.

Here are some senators to watch as the debate unfolds:

FIRST, WHAT’S A RESOLUTION OF DISAPPROVAL?

In this case, it’s an official, one-sentence statement that says Trump’s emergency declaration “is hereby terminated.”

The resolution is almost certain to pass the Democratic-controlled House, which is expected to vote Tuesday. If it also survives the Senate, Trump would be expected to veto it. Congress is not expected to muster the two-thirds majority to override a veto, which means the Republican president’s declaration could move forward.

But no president wants a rebuke from his own party.

The math: The Senate is controlled by a 53-47 Republican majority. So it would take four Republicans voting with every Democrat to pass the measure and send it to Trump.

More than four have voiced significant discomfort with Trump’s move.

They’re two Republican women Trump hasn’t been able to count on voting with him. And they say the situation at the border does not merit the wall that Trump is demanding.

Sen. Susan Collins of Maine, who is up for re-election in 2020, this week became the first Republican to publicly state that she would support the effort to stop the emergency declaration that Trump says is appropriate to secure the border.

“I don’t think that is what the law was intended for,” Collins said. “It was intended for catastrophic events, such as the attacks on our nation on 9/11 and severe natural disasters.”

She said the president’s action “completely undermines” the role of Congress and is of “dubious constitutionality.”

Voting to block Trump’s declaration would insert some distance from the president after she voted for Justice Brett Kavanaugh’s confirmation.

Sen. Lisa Murkowski of Alaska did not say whether she would vote to disapprove of Trump’s emergency declaration. But she said Tuesday that she worries about the precedent that could be set by Trump going around Congress to fund the wall.

He’s the most senior member of the Senate: its president pro tempore, third in line to the presidency, a former chairman of the Judiciary Committee.

“The Constitution grants Congress the authority to appropriate federal dollars,” Grassley said pointedly in a statement.

He has not said how he’d vote on the resolution for disapproval, but frowning on the president’s declaration could send a signal to less-senior senators on the fence.

“Whether or not it should be legal is a different matter. Congress has been ceding far too much power to the executive branch for decades,” Lee said in a statement. “We should use this moment as an opportunity to start taking that power back.”

Lee has not said how he’d vote on Trump’s declaration. But he has recent history of bucking Trump over ending military assistance to Saudi Arabia in Yemen’s civil war.

The 2020 elections loom, and not just for the presidency. Twenty-two Republican-held Senate seats are on the ballot, including some targeted by Democrats.

Among them: Colorado, which has voted for the Democrat in the most recent three presidential elections and is represented by Republican Sen. Cory Gardner. His state is one of 16 that have filed suit against the emergency declaration. He has said Congress is “most appropriately situated to fund border security.”

Sen. Thom Tillis, R-N.C., comes from a state that votes reliably Republican. That’s why his break with Trump over the emergency declaration was so striking.

“It wouldn’t provide enough funding to adequately secure our borders,” Tillis said. “I don’t believe a national emergency declaration is the solution.”

He warned that the move could take the country down a “rabbit hole” with future presidents seizing unchecked executive power.

Florida Sen. Marco Rubio is not up for re-election in 2020, but he hails from perhaps the nation’s swingiest presidential state. He lost the GOP presidential nomination to Trump in 2016. And he’s told reporters he doesn’t think he can support Trump’s declaration.

“No crisis justifies violating the Constitution,” he said.

Senators poised to retire are in some ways freed of consequences for voting how they please. So it’s worth watching Sen. Lamar Alexander, R-Tenn., who said: “Declaring a national emergency is unnecessary, unwise and inconsistent with the U.S. Constitution.”

Then there’s never-shy Sen. Pat Roberts, a Kansas Republican, who said Saturday that he worries the declaration will set up a government “by fiat” in the future.

Look for how freshmen Republicans, elected despite the 2018 backlash against Trump, vote on such a disapproval resolution.

Sen. Mitt Romney, the newcomer from Utah who voted to reopen the government without paying for Trump’s wall, has publicly feuded with Trump for years.

“I do not believe declaring a national emergency is the right approach,” he said.

Freshman Sen. Martha McSally, appointed to the border state seat held by the late Arizona Sen. John McCain, is facing a challenge in 2020 from Democrat Mark Kelly. She hasn’t said how she’d vote on the resolution, a silence for which Kelly has criticized her.