Ohio Gov. John Kasich is one of the most respected men in politics today. Kasich, who is out with a brand new book, took time to speak with Florida Live host Dan Maduri. The two cover a great deal of ground in this entertaining and informative conversation.

The 64-year-old Kasich was President Donald Trump’s longest-lasting competitor in the GOP primary race and declined to endorse Trump after he clinched the nomination.

Kasich talks to Dan about what he calls the positive tone of his presidential campaign compared with the election cycle’s negativity. The two discuss why the country is so very divided at this time and what need to learn to become closer.

Dan spoke to Kasich about what the country has to do to heal that divide?

The two discuss the middle class, and the importance of rebuilding the school’s in the country. Kasich talks about creating jobs and training that comes with the best possible education.

He also talks about the importance of faith. Kasich spoke about learning to be bigger than one’s self. To think about community, and public service  , giving back to the community.

Dan and Kasich also talk about President Trump and how he needs to bring the country together. The two also talked about if Trump ever offered him the job as vice president, and if he did why did he turn him down?

The two spoke about sports where the two NFL teams the Cleveland Browns and the Cincinnati Bengals picked players with questionable pasts. Kasich spoke about sports stars being role models and that in did not matter if they were in Ohio or any where in the world people need to respect and treat each other with compassion.

Kasich’s “Two Paths: America Divided or United” is on the shelves now. The book reflects on Kasich’s career, his run for the presidency and his views on a wide range of issues, from media coverage of politics to voting rights.

LISTEN TO FLORIDA LIVE WITH DAN MADURI – WEEKDAYS FROM 3 PM TO 6 PM ON WWBA AM 820 – TAMPA-ST. PETERSBURG. 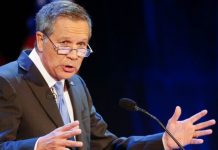 Gov. John Kasich thinks the Senate should slowdown and work on a bi-partisan bill