Michael, the 13th named storm of the 2018 hurricane season, was upgraded to a hurricane on Monday by the National Hurricane Center. The NHC has Tampa Bay currently under a Tropical Storm Watch, meaning to expect possible tropical storm conditions within 48 hours.

Continued strengthening is expected for Hurricane Michael, which at 2:00 PM on Monday was about 30 miles southwest of the western tip of Cuba. The maximum sustained winds of 75 put it just past the hurricane threshold. Forecasters expect that Michael will become a major hurricane by Tuesday or Tuesday night as it gathers strength in the warm waters of the Gulf of Mexico.

Even though Michael will be passing by the Tampa Bay area, it is likely to still produce storm surge, heavy rain, and Tropical Storm caliber winds. Residents are urged to prepare and take caution.  The storm will pass by the area Tuesday into Wednesday, and might still move far enough into the gulf to spare the area even Tropical Storm conditions.  Still, expect rain and wind through Wednesday.

Hurricane Michael is expected to bring 2-4 inches of rain to the Florida Peninsula, including the Tampa Bay area, with up to six inches possible in some areas. Tampa Bay is also expected, as of the latest forecasts, to experience 2-4 feet of storm surge when the storm passes this week.

Forecasts late Monday morning have Michael hitting the Panhandle as a major hurricane, meaning a hurricane with sustained winds in excess of 100 miles per hour. The storm could produce as many as 12 inches of rain in some places, as well as up to 12 feet of storm surge.

Tracking as of Monday afternoon has Michael going through the Carolinas after hitting Florida. Although this would not be the direct hit the mid-Atlantic states suffered during Hurricane Florence, another named storm could worsen conditions for those parts of the area still recovering.

The storm is expected to make US landfall on the Floirda Panhandle. As a result, a Hurricane Watch is in effect from the Florida-Alabama border to the Suwannee River. 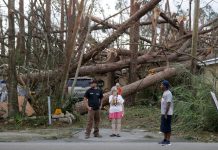 Michael Leaves Path of Destruction In Panhandle, Not Done Yet

Gillum Sees Exposure, But Increased Risk In Governor’s Race Due to Michael

StormTracker at News Talk Florida With the Latest on Michael