MIAMI (AP) — Two former South Florida police officers who are married have been sentenced to prison for illegally selling hundreds of firearms and violating tax laws.

Trial evidence showed the couple illegally sold firearms around the country on the Internet and also at gun shows. These included a number of AR-15 assault-style rifles. Witnesses said Rafael Valdes took weapons parts from the Hialeah Police Department evidence room and sold them. 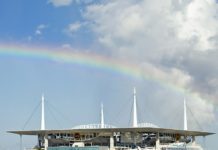 No masks, no distance: Pandemic wedding horrors for vendors

Florida: coronavirus hospitalizations down, but the deaths count continues to rise.

No masks, no distance: Pandemic wedding horrors for vendors