Heavy rains from the Gulf of Mexico spawned flooding in the Southeastern states Wednesday ahead of what could become the year’s first tropical storm, just as tourist season begins.

The National Hurricane Center said a disturbance still over water in the western Caribbean had a 70 percent chance of becoming a subtropical or tropical system by Memorial Day, and rain is forecast to continue even if it doesn’t.

The system will be named “Alberto” if it strengthens into the first tropical storm of the 2018 hurricane season, which doesn’t begin until June 1. Forecasters said rain would become more widespread and heavier as the area moves northward toward land.

Darlene Speck said she had to drive about 2 miles (3.2 kilometers) out of the way to get to work at Terry’s Get & Go, a convenience store in Smiths Station, Alabama, because of a barricade blocking a flooded road.

“We’ve got a creek that’s flooding not even a quarter mile from where our store is,” said Speck.

As much as 7 inches (18 centimeters) of rain is possible in south Florida, where some areas had more than 14 inches (35 centimeters) of rain last weekend. Similar rain totals are possible from southeastern Louisiana to central Georgia, with the coasts of Alabama and the western Florida Panhandle in a bull’s-eye to receive the most rain.

Memorial Day is the traditional beginning of beach season, but the weather service issued warnings about dangerous currents along the Gulf Coast during the holiday period. People uncertain about the weather already are making other plans because of the forecast.

“We actually have had several cancellations today,” said Liz Wood, who works at the beachfront Buccaneer Inn on St. George Island, Florida. “It always gets like this when there’s uncertainly over when (a storm) is going.”

Ike Williams, who owns a company that rents beach chairs, umbrellas and other gear in Gulf Shores, Alabama, said workers were stowing away some items because of forecast.

“This is probably the earliest storm that I can ever remember in the history of the business that has ever threatened this early. That’s 38 years,” said Williams, of Ike’s Beach Service.

By Jay Reeves of the Associated Press. 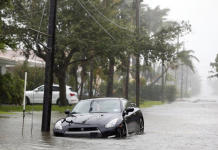