The discovery off Looe Key, south of Big Pine in part of the Florida Keys National Marine Sanctuary, puts in jeopardy the southern end of the world’s third-largest barrier reef — a scuba-diving destination renowned for its biological diversity. It’s also more bad news for a reef that has lost half its coral over the last two centuries, already is suffering impacts from climate change and has emerged from a three-year bleaching event.

“It is just heartbreaking for us because it’s such an iconic reef,” Muller said. “I can’t sleep at night because I think about it and what else can we do.”

The disease, which now stands as the longest and largest infection for coral anywhere, jumped a gap in the 360-mile long reef tract at the Seven Mile Bridge, a point scientists had hoped would provide a natural obstacle. It first appeared off Virginia Key in 2014 and began spreading north, south and west. But until November 2017, it appeared to stop at the east end of the famous Keys bridge, Muller said.

Scientists believe the disease is likely caused by a bacterial infection carried by currents, but little else is known.

The Florida Current, which flows around the Florida Straits north into the Gulf Stream, likely carried it to Martin County, with smaller eddies spreading it south and west, Muller said. When coral began falling sick near Virginia Key, the U.S. Army Corps of Engineers was in the midst of dredging Government Cut. Miami-Dade County also has a massive sewage outfall pipe nearby. It’s not clear whether either triggered the disease, or contributed to the spread on already stressed coral that also endured back-to-back warm summers beginning in 2014.

“We have this one unique event and nobody was there figuring all these things out as it was happening,” she said. “We’ll do our best to go back and recover information, but as of right now I’m not convinced we’ll ever know.”

A large team of researchers led by the Florida Department of Environmental Protection with help from the National Oceanic and Atmospheric Administration, universities and nonprofits including Mote have set up a joint investigation. They have so far been unable to identify the bacteria causing the disease because they’ve been unable to grow cultures. Coral, like people, collect countless bacteria — some good and some bad. To identify the bad, researchers need to grow the suspected pathogens and apply it to healthy coral in a lab.

Scientists also suspect currents are spreading the disease, but Muller said it has sometimes moved in unexpected ways.

“It definitely has hot places,” she said. “You have certain reefs getting infected but then it seems to hop over a reef and show up in a different area than where we expect.”

They’re also working to identify vulnerable coral and find ways to treat or at least contain the damage.

Brain and large boulder coral, the tract’s biggest reef builders, appear to be more susceptible, but scientists aren’t sure why, Muller said. They’ve tried a number of ways in lab experiments to treat it — cutting out sick coral, applying chlorine-laced epoxy as an adhesive bandage to create an antiseptic barrier and carving out fire breaks around reefs. They’re also experimenting with a paste laced with antibiotics, trying to find a balance that will treat the coral but not contaminate reefs that already struggle with antibiotics from sewage outfall.

But coral continue to die at an alarming rate.

The only other comparable disease outbreak occurred in the 1970s and ’80s and nearly wiped out staghorn and elkhorn corals, which landed both on the endangered species list. Scientists still don’t know what caused them to become sick, but Muller said there’s more hope for this epidemic. Coral science has advanced dramatically in the last four decades and reef rebuilding efforts started, with nurseries from the Keys to Miami growing coral. In recent years, Mote alone has planted 35,000 with plans to plant another 25,000 this year. Scientists are also working on developing more resilient coral.

“It’s just so hard when you talk about the marine environment because of how connected it is,” she said. “It’s just mind-boggling to try to develop something that’s large enough to have a real impact.”

Information from: The Miami Herald, http://www.herald.com

By Jenny Staletovich of the Associated Press 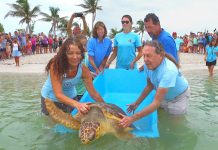