TALLAHASSEE, Fla. (AP) — Several Florida school districts are telling students to leave their backpacks at home during the final days of the school year.

A north Florida school district announced Thursday that students would not be allowed to bring backpacks next week.

In a statement sent to parents Leon County school officials said there were “security benefits” to the ban. The ban does not apply to purses.

Leon County is not the only Florida district to adopt such a policy. Polk County officials announced a backpack ban right after last week’s school shooting in Santa Fe, Texas.

Seminole County and Orange County also have similar policies for the final school days. The Orlando Sentinel reported the district has banned backpacks for a long time to cut down on students bringing items such as water balloons. 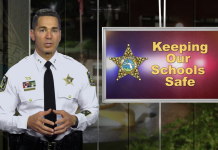