Newstalk Florida – N
Listen Now WHBO AM 1040
Listen Now WWBA AM 820
Home Florida When You Say ‘All for Transportation’ in Hillsborough, ‘All’ Means 5 out...
Facebook
Twitter
Pinterest
WhatsApp

Who is behind the Hillsborough County Transportation effort?

By SHARON CALVERT For the Sunshine State News

Five downtown Tampa special interests contributed $150,000 each to fund the “All for Transportation” (AFT) transit tax-hike petition effort, literally buying their way onto the November ballot in Hillsborough County.

The $750,000 was used to fast-track a proposed massive and unnecessary 30-year transit tax hike that would raise the sales tax to 8 percent — highest in the state — if the referendum passes.

The tax will reel in $15-$18 billion. Most of the funds will be earmarked for inside the City of Tampa with about 30 percent of the county’s population.

Below is the entire AFT donor list from when it was first created in June to the latest campaign filing through Aug. 10 (on the Hillsborough County Supervisor of Elections website). A total of 15 donations were made to what AFT called a “community”-led tax hike petition effort. 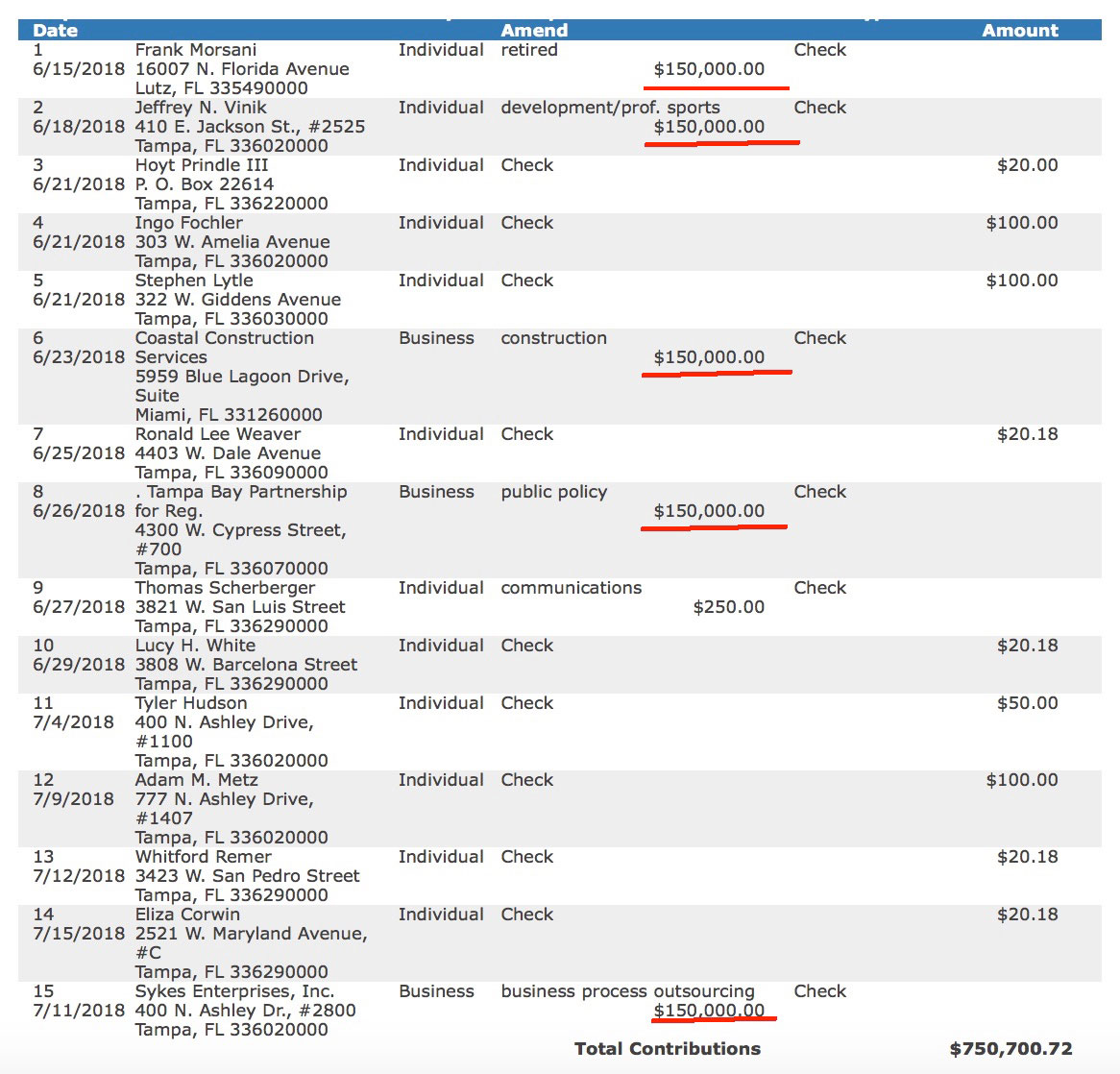 In a county where 1.4 million reside, it was actually a microscopic “community” of five donors who paid consultants and petition gatherers to get the transit tax hike on the ballot. A dismal $700.72 came from 10 other donors, a whopping 15 donors in all.

AFT’s “community”-led transit tax-hike effort ignored or disregarded the largest employer community in the county — the Hillsborough County School District — which had been considering a sales tax increase to fund education. AFT was able to pre-empt the school district’s request for their OPPAGA audit — as we reported here.

The five downtown Tampa special interests formed the bank account for AFT. Without the $750,000 from them, the All for Transportation  tax hike would not exist.

Because from AFT’s latest campaign filings through Aug. 10 on the SOE website, $677,400 of the special interest funding was spent getting the transit tax hike on the November ballot.

For “AFT Donors and Expenditures,” see the chart below. 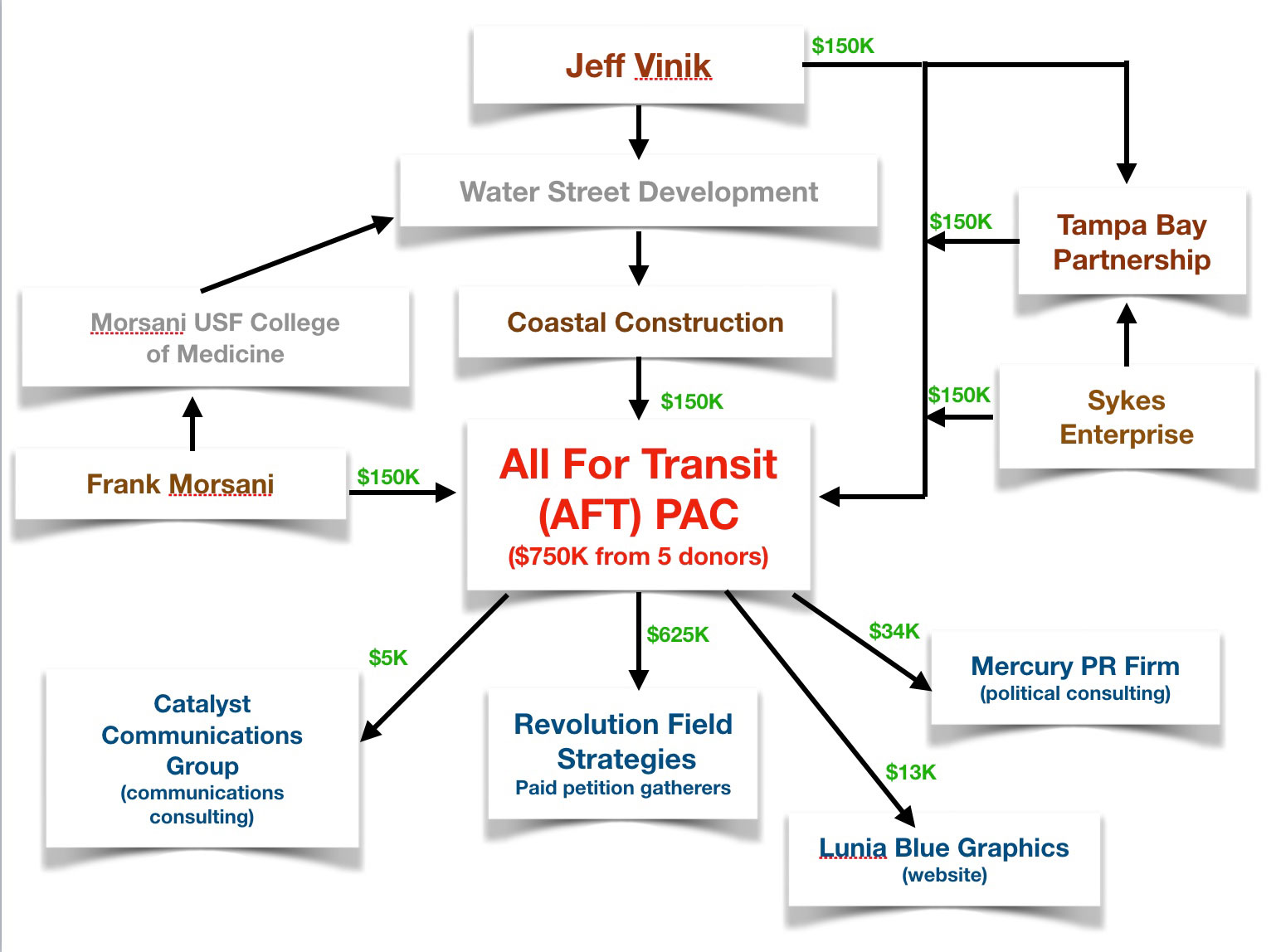 Over 92 percent ($625,000) was spent on paid petition gatherers, many of whom did not even live in Hillsborough County. Yes, AFT hired non-Hillsborough residents to convince county voters to raise their taxes for development interests.

Mercury was one of the PR firms that wanted to promote the ill-fated Go Hillsborough advocacy campaign. The Times reported in 2016 that it was Mercury that conducted the poll “financed by unidentified business interests” on the Go Hillsborough one-half percent tax hike.

Those business interests are no longer “unidentified.”

“The Times has taken itself out of being fair and balanced when writing about Vinik, his companies and the deals government is making with him,” Manteiga writes.

With the same special interests that bought their way onto the ballot also bailing out the Times, they now have a personal media megaphone to cheerlead for the transit tax hike and filter out, shut down, and ignore any opposition.

The public will never know the identity of the nonprofit’s donors; however, political advocacy campaigns cannot be legally run through a nonprofit.

With only $73,000 remaining, AFT’s coffers must be replenished very soon to launch an aggressive marketing and deceptive advocacy campaign over the next 75 days. Expectations are that multi-millions will be spent.

Sharon Calvert is a conservative activist and with her husband, Mark, writes the blog Eye on Tampa Bay. This story was reprinted with permission from Tampa Bay Beat.