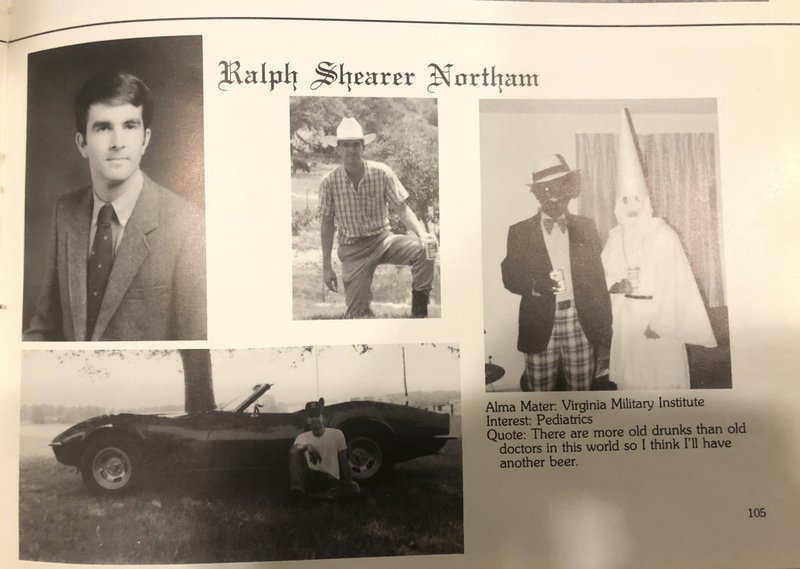 RICHMOND, Va. (AP) — A Virginia Democrat who has spoken with Gov. Ralph Northam has told The Associated Press that the governor now does not believe he was in a racist picture in his 1984 medical yearbook and has no immediate plans to resign.

The official was not authorized to speak on the record to detail a private conversation. The official told the AP on Saturday that Northam plans to address the issue with the public in the afternoon.

Northam is calling Virginia Democrats to try and gain support. Nearly his entire political base has called for him to resign.

Northam’s 1984 yearbook page shows a picture of a person in blackface and another wearing a Ku Klux Klan hood next to different pictures of the governor.

After the picture went public Friday, Northam issued a statement saying he was “sorry for the decision I made to appear as I did in this photo.”

But the Democrat who spoke to Northam said that after further reflection the governor said he has no memory of wearing either of the racist costumes and doesn’t believe he is in the picture.

Northam’s efforts do not appear to be successful so far. The Virginia Democratic Party issued a statement demanding Northam’s immediate resignation.

The yearbook images were first published Friday afternoon by the conservative news outlet Big League Politics. The Virginian-Pilot later obtained a copy from Eastern Virginia Medical School, which Northam attended. The photo shows two people looking at the camera — one in blackface wearing a hat, bow tie and plaid pants; the other in a full Ku Klux Klan robe.

An Associated Press reporter saw the yearbook page and confirmed its authenticity at the medical school.

The president of Eastern Virginia Medical School apologized on behalf of the school for “past transgressions of your trust.” In a statement on the school’s website , President Richard Homan said the photo “absolutely antithetical” to the school’s principles, morals, and values. He said he would convene a meeting of school leadership to address the issue.

Meanwhile, Northam – in his first apology, issued in a written statement Friday – called the costume he wore “clearly racist and offensive,” but he didn’t say which one he had worn.

He later issued a video statement saying he was “deeply sorry” but still committed to serving the “remainder of my term.”

“I accept responsibility for my past actions and I am ready to do the hard work of regaining your trust,” Northam said.

A small number of protesters stood outside the governor’s mansion Saturday to demand his resignation.

Northam’s departure would mean current Lt. Gov. Justin Fairfax, a Democrat who is only the second African-American to win statewide office in Virginia, would be the next governor. Northam’s term was set to end in 2022.

Black lawmakers said they met with Northam Friday evening, and said in a statement they appreciate his service.

“But given what was revealed today, it is clear that he can no longer effectively serve as governor,” the Virginia Legislative Black Caucus said.

State Sen. Louise Lucas of Portsmouth, a close ally of Northam and longtime African-American lawmaker, said she told the governor Saturday that he should have denied he was in the photo immediately after it went public. The delay and his apology raises questions about why he thought it was possible he could have been in the picture.

“That’s hard for me to swallow. I don’t think I’m being unreasonable. But golly Jesus, he could have said that the minute he saw the picture,” Lucas said

Others said there was no question he should step down. Among them: Democratic presidential hopefuls Cory Booker, Julian Castro, Kirsten Gillibrand, Kamala Harris and Elizabeth Warren; newly elected Democratic U.S. Reps. Elaine Luria and Abigail Spanberger of Virginia; the NAACP and Planned Parenthood.

Northam spent years actively courting the black community in the lead up to his 2017 gubernatorial run, building relationships that helped him win both the primary and the general election. He’s a member of a predominantly black church on Virginia’s Eastern Shore, where he grew up.

“It’s a matter of relationships and trust. That’s not something that you build overnight,” Northam told the AP during a 2017 campaign stop while describing his relationship with the black community. Northam, a folksy pediatric neurologist who is personal friends with many GOP lawmakers, has recently come under fire from Republicans who have accused him of backing infanticide after he said he supported a bill loosening restrictions on late-term abortions.

Last week, Florida’s secretary of state resigned after photos from a 2005 Halloween party showed him in blackface while dressed as a Hurricane Katrina victim.