WASHINGTON (AP) — Abandoning his previous restraint, President Donald Trump challenged the credibility of the woman accusing his Supreme Court nominee of sexual assault on Friday, declaring that if the alleged attack was so terrible she would have reported it to law enforcement.

Trump’s change in tone — and apparent shift in tactics — came as Christine Blasey Ford’s lawyers negotiated with the Senate Judiciary Committee on the terms for her possible testimony next week in a dramatic showdown over her accusation that threatens Judge Brett Kavanaugh’s confirmation.

Trump tweeted: “I have no doubt that, if the attack on Dr. Ford was as bad as she says, charges would have been immediately filed with local Law Enforcement Authorities by either her or her loving parents. I ask that she bring those filings forward so that we can learn date, time, and place!”

The president previously had avoided naming Ford or plainly casting doubt on her account. Ford alleges that at a party when they were teenagers 30 years ago a drunken Kavanaugh held her down on a bed, tried to remove her clothing and clapped his hand over her mouth when she tried to scream before she managed to escape. Kavanaugh has denied all parts of the allegation.

I have no doubt that, if the attack on Dr. Ford was as bad as she says, charges would have been immediately filed with local Law Enforcement Authorities by either her or her loving parents. I ask that she bring those filings forward so that we can learn date, time, and place!

Shortly after Trump’s tweet, Senate Majority Leader Mitch McConnell, R-Ky., expressed his determination to get Kavanaugh confirmed. He told evangelical activists at the annual Values Voter conference the Senate will “plow right through.”

The accusation has jarred the 53-year-old conservative jurist’s prospects for winning confirmation, which until Ford’s emergence last week had seemed all but certain. It has also bloomed into a broader clash over whether women alleging abuse are taken seriously and how both political parties address such claims with the advent of the #MeToo movement — a theme that could echo in this November’s elections for control of Congress.

With his comment, Trump went against the advice of advisers who had counseled him to stay out of the fray. He has previously defended friends and other men against the claims of women.

Ford has said she didn’t tell anyone at the time about the incident. According to the federal Bureau of Justice Statistics, a majority of rapes and other sexual assaults are not reported to police.

Trump’s tweet could affect GOP support among women going into the midterm elections. It could also threaten Kavanaugh’s support with several Republicans — including Sens. Susan Collins of Maine, Lisa Murkowski of Alaska and Jeff Flake of Arizona — who have not declared their stances on his nomination. If two Republicans vote against Kavanaugh, his nomination could fail.

In another tweet, Trump, who was in Las Vegas for various events, wrote: “Judge Brett Kavanaugh is a fine man, with an impeccable reputation, who is under assault by radical left wing politicians who don’t want to know the answers, they just want to destroy and delay. Facts don’t matter. I go through this with them every single day in D.C.”

Ford is willing to tell her story — but only if agreement can be reached on “terms that are fair and which ensure her safety,” her lawyer said Thursday. She said Ford needs time to make sure her family is secure, prepare her testimony and travel to Washington.

Attorney Debra Katz said anew that Ford, 51, a psychology professor in California, has received death threats and for safety reasons has relocated her family.

Ford’s preference is to testify to the Senate committee next Thursday, and she doesn’t want Kavanaugh in the same room, her attorney told the panel’s staff in a 30-minute call that also touched on security concerns and others issues, according to a Senate aide. That aide wasn’t authorized to discuss the matter publicly and spoke on condition of anonymity.

In addition to security, expected to be provided by Capitol Police, Ford has asked for press coverage of her testimony to be the same as for Kavanaugh. Reporters had assigned seating and were kept separated from the nominee, who was whisked to and from the room.

Ford’s attorney said Ford would like to testify first, but that might be complicated because Kavanaugh has already agreed to Monday’s scheduled hearing.

Ford has told the panel she would prefer the committee not use outside counsel to question her because that would make it seem too much like a trial, the attorney told the panel. All of the Republicans on the panel are men, and the committee is known to be concerned about the optics of having questions from the GOP side come only from men.

Judiciary Chairman Chuck Grassley, R-Iowa, has indicated Monday would be Ford’s only chance to make her case, but that was several days ago. Republicans are anxious to move ahead to a vote by the committee, where they hold an 11-10 majority, and then by the full Senate, which they control, 51-49.

Taylor Foy, spokesman for Republicans on the panel, said that Grassley “will consult with his colleagues on the committee. He remains committed to providing a fair forum for both Dr. Ford and Judge Kavanaugh.”

Ford has asked the committee to subpoena Mark Judge, who Ford has said was in the room at the time of the alleged incident. Judge has told the committee he does not recall the incident and does not want to speak publicly.

Kavanaugh, meanwhile, has said he is ready to appear Monday. He wrote to Grassley: “I continue to want a hearing as soon as possible, so that I can clear my name.” Kavanaugh was seen at the White House on Thursday. 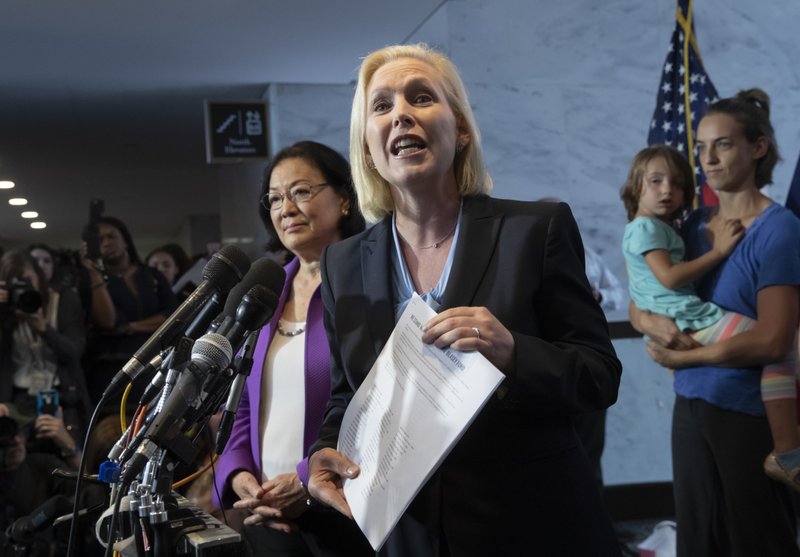 Trump, who had been careful in recent days not to criticize Ford as he defends his nominee, told Fox News host Sean Hannity Thursday that he feels the nomination has been delayed long enough.

He said Kavanaugh’s accuser should “have her say and let’s see how it all works out, but I don’t think you can delay it any longer. They’ve delayed it a week already.”

Republicans have resisted all Democratic efforts to slow and perhaps block Kavanaugh’s confirmation. A substantial delay could push confirmation past the November elections, when Democrats have a shot at winning Senate control, plus allow more time for unforeseen problems to crop up.