DETROIT (AP) — Former President Bill Clinton memorialized Aretha Franklin as a woman with “breathtaking talent” who kept on charming audiences despite her illness.

The former president recalled being an “Aretha groupie” all his life and being thrilled to meet her backstage at her last public performance, a benefit in Harlem for Elton John’s AIDS charity last year. She was “gaunt” but went on to perform for 45 minutes.

“How you doing, baby?” she asked him.

The former president also asked the audience to forgive him, saying he was happy that Franklin’s casket was still open when he arrived because he just had to see what she was wearing.

Clinton said, “I wonder what my friend has got on today. I wanted to see what the girl was carrying out,” to a wave of laughs and claps from the crowd. Franklin was wearing a gold gown, her fourth outfit of the week.

He ended his time by playing Franklin’s “Think” on his iPhone into the mic. “It’s the key to freedom!” Clinton said. 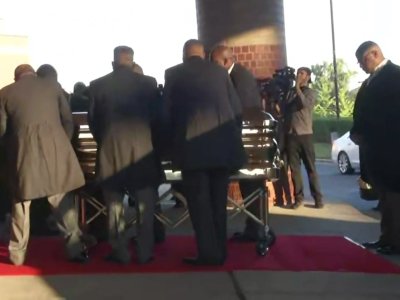 Aretha Franklin’s family members have paid tribute to a woman who cooked for them, gossiped with them and passed on her gifts to them.

Victorie Franklin, a granddaughter, said at the Queen of Soul’s funeral that she will always cherish being part of Franklin’s legacy, recognizing parts of her grandmother in her.

“Nothing sounded better to me than my grandmother’s voice,” said Victorie. “Her voice brought peace.”

Grandson Jordan directed his remarks directly to Aretha, frequently stopping to fight back tears. “I’m sad today, because I’m losing my friend, but I know the imprint she left on this world can never be removed. You showed the world God’s love, and there’s nothing more honorable.”

Obama, in a statement read by the Rev. Al Sharpton, hailed Franklin for reflecting “very best of the American story.” Her music, he said, “captured some of our deepest human desires, namely affection and respect.”

Bush’s statement, read by Franklin friend Barbara Sampson, called Franklin “a woman of achievement with a deep character and a loving heart” who made “lasting contributions to American music with her gospel-inspired style and distinctive voice.”

Former President Bill Clinton was in attendance and is slated to speak later.

Ariana Grande and the Rev. Al Sharpton have memorialized Aretha Franklin in words and song.

Sharpton recalled Franklin’s activist side, noting she raised money for the Rev. Martin Luther King Jr. and created “the soundtrack of the civil rights movement.”

“She gave us pride. She gave us a regal bar to reach,” Sharpton said. “She represented the best in our community.”

Sharpton also took aim at President Donald Trump for saying that Franklin once worked for him. “She performed for you,” he said. “She worked for us.”

Earlier, Ariana Grande sang “(You Make Me Feel Like) A Natural Woman.”

Bishop Charles H. Ellis said after the song that he felt old because when he saw “Ariana Grande on the program, I thought it was a new something at Taco Bell,” but said he now owed her some respect.

Faith Hill honored Aretha Franklin by singing “What a Friend We Have in Jesus” during the Queen of Soul’s funeral.

Hill’s performance got Bill Clinton, the Rev. Jess Jackson and the Rev. Al Sharpton up on their feet. Many in the audience of the Greater Grace Temple in Detroit also stood as Hill belted out the hymn.

Detroit Mayor Mike Duggan also took to the podium to announce a proposal to rename the city’s waterfront Chene Park after Franklin.

The mayor said: “When Aretha Franklin sang, it sounded like the voice of Detroit.”

Aretha Franklin’s body has been covered in shimmering fabric and her casket has been closed, with shouts of, “Hallelujah!” coming from the audience.

Family members surrounded the Queen of Soul’s gold casket as it closed on Friday morning, marking the formal start of her funeral.

Bishop Charles H. Ellis of Greater Grace Temple in Detroit began speaking nearly two hours after the ceremony had been slated to begin.

The church’s choir sang “Walk in the Light” as Ellis encouraged the congregation to sing along.

Ellis said, “It took a little time to get in here, but I believe the queen wouldn’t have had it any other way.” He said everyone present would get a program, and joked they were likely to be available soon on eBay.

The Queen of Soul Aretha Franklin has been honored at London’s Buckingham Palace on the day of her funeral in Detroit.

The official residence of Queen Elizabeth II became an unlikely setting for a rendition of Franklin’s “Respect” played by the Welsh Guards Band during the popular Changing of the Guard ceremony Friday.

The soul music may have startled tourists expecting British pomp and ceremony Friday from the Welsh Guards, who were wearing traditional red military jackets topped by high bearskin hats.

The Army tweeted that it wanted to pay tribute to a “musical icon and inspiration.”

The Queen of Soul’s funeral is underway.

A processional of Aretha Franklin’s family and other loved ones is filling the aisles of the Greater Grace Temple on Friday morning in her hometown of Detroit.

The church’s choir sang Franklin’s “Say a Little Prayer” and her version of “Bridge Over Troubled Water” as mourners arrived. When the diva’s family arrived, the song was “You Are The Source of My Strength.”

They filed past and paid their respects at Franklin’s open casket, where they saw her wearing a sparkling full-length gold dress with sequined heels — her fourth and final outfit of the week.

Many in the pews ignored repeated calls of no phones permitted to take selfies with former President Bill Clinton and Hillary Rodham Clinton as they filed in.

Ariana Grande and her fiance, Pete Davidson, walked arm-in-arm and chatted with dignitaries like Bill Clinton before the funeral for Aretha Franklin.

The singer, who is scheduled to perform at the ceremony, and the “Saturday Night Live” cast member entered Detroit’s Greater Grace Temple smiling on Friday and posed for photos. They even shared a brief kiss on the stage.

Others from the world of show biz seen in the church included Jennifer Hudson, Faith Hill, Tyler Perry and Jenifer Lewis.

The start of the service — intended to begin at 10 a.m. — was delayed. Franklin’s white hearse arrived more than two hours before the service was scheduled to start.

Floral arrangements from such singers as Barbra Streisand and Tony Bennett and from the family of Otis Redding were set up in a hallway outside the sanctuary.

Franklin’s white hearse arrived more than two hours before the service was scheduled to start.

Aretha Franklin is dressed in a sparkling full-length gold dress with sequined heels for her final outfit.

Mourners got a glimpse of the Queen of Soul before her funeral Friday during an open casket viewing at the Greater Grace Temple. The gold dress is the fourth outfit Franklin has worn during a week of events leading up to her funeral.

Franklin was dressed head to heel in red for her first public viewing on Tuesday, a nod to her membership in the sorority Delta Sigma Theta. She wore a baby blue dress on Wednesday and a rose gold gown for a viewing Thursday at the Detroit church where her father was the longtime pastor.

Numerous floral arrangements from celebrities including Sam Moore, Mariah Carey, Barbra Streisand and the family of Otis Redding were set up in a hallwayoutside the sanctuary.

Moore’s arrangement included a card that read, “You know I always adored and loved you to bits and pieces … Even when we would fuss.”