It made national headlines.

Jarrod Ramos, the Annapolis gunman, grew up in Anne Arundel, Md. and apparently harbored a longtime grudge against the Capital Gazette.  He resided in the circulation area of the Times and Post.  CNN is ubiquitous on local cable channels.  Raw Story is a popular digital news source.

“And so the first place I point that gun is at the media,” he crowed.  “I’ve never seen grown men cry like little girls, for when that gun goes off those media folks just hit the deck like no one’s business. It’s great payback. I love it.”

Words are powerful, whether wielded by media entities or an irresponsible, intemperate public official.  All politicians have a moral responsibility to act within certain social parameters regardless of their locus on the philosophical spectrum.  Buckhorn is a Democrat but might have well been speaking across party lines. 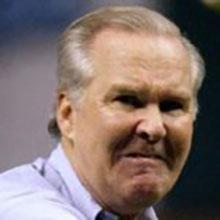 His harebrained comment was not his first foray into the national spotlight.  Other widely reported missteps:  turning downtown Tampa into an armed camp during the 2012 Republican national convention, condoning the targeting of minorities by the Tampa Police Department, and the denial of manmade climate change, though he heads a city deemed one of the most vulnerable locales in the world to flooding.

Amid a national uproar in the days following the verbal fusillade, Buckhorn’s spokesperson attempted to ameliorate the debacle.  Not Buckhorn.  His spokesperson said the mayor’s remark was never meant to be taken seriously.

The apology came after several war correspondents who attended his speech took to the Military Reporters & Editors Facebook page to say they were appalled,  Buckhorn initially dismissed those complaints as “silly.”

The entire episode is typical of Buckhorn’s relations with the press.  He essentially has none, at least with rank-and-file reporters.  They have been conditioned to deal with his spokesperson, Ashley Baumann.  The term-limited Buckhorn only speaks with the Tampa Bay Times editorial board and does its bidding.

At ribbon-cutting ceremonies and groundbreakings, Buckhorn is all-in with press coverage.  The more cameras, the better.  When it comes to answering tough questions, Harry Callahan turns into the Pillsbury Doughboy.

City of Tampa dwellers, after seven years of Buckhorn fatigue, are ready to move on to the 2019 elections and a fresh start.

With negative national headlines frequently recurring since 2011 about their city, Tampa business leaders should not be perplexed about their inability to attract millennials, high-tech relocations, and legitimate entrepreneurial startups.  Tampa’s submission to the Amazon HQ2 sweepstakes was looked on as pathetically comical.

The Times, the Bay area’s lone newspaper, long, long ago tossed its ethics.  Now, with a reported $100+ million in debt and none-to-negative influence in its circulation area, the paper is looked upon as “Dead Brand Walking”

Newspapers are killing themselves.  They don’t need outside help.