Under the headline “Debt-Ridden Tampa Bay Times Duping Employees, Subscribers, Advertisers, Suppliers,” Bleyer irreverently pulls the covers off much of the agony the state’s largest newspaper has been going through behind closed doors.

In June 2017 Paul Tash, the Times’ $550,000-a-year chairman and CEO was upfront in an editorial about the Times’ underwater burden. “… A group of local investors is stepping forward with a loan of $12 million, part of a larger refinancing by the Times company,” he wrote. But apparently now the situation is much worse.

Bleyer claims the Times’ pension plan is in jeopardy, its assets mortgaged and bankruptcy looms as it struggles with a total indebtedness believed to be in excess of $100 million. And he produces figures to prove it.

“Times employees have a regular payroll deduction for pension benefits, but it could very well be funneled into financing current operations instead of its intended purpose,” he suggests.

“Any employee sufficiently deranged to want to continue employment at the Times should require an examination of its books,” Bleyer writes. “Hell — subscribers, advertisers, suppliers and any entity that has advanced money to the Times should demand to see the results of a forensic audit …”

The author wryly turns the knife by including in his story a video of “The Underwater Song.” The video is reproduced on this page. 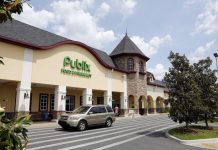 In Defense of Publix’ Gubernatorial Endorsement