Will try again at Kennedy Space Center on Friday

This latest version of the Falcon 9 was supposed to blast off Thursday from Florida’s Kennedy Space Center, carrying Bangladesh’s first satellite, which would bring the internet to all corners of the country.

But the countdown came to an abrupt halt with less than a minute remaining.

Flight controllers scrambled to figure out the cause of the automatic abort, but with time running out, called it quits for the day. SpaceX says it will try again Friday.

SpaceX chief executive Elon Musk says the improved boosters can be reused more than 10 times each and require little or no work between launches. His goal is to eventually launch the same booster twice within 24 hours, drastically reducing costs.

By Marcia Dunn of the Associated Press 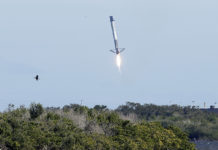