Washington – ASSOCIATED PRESS – Scandal-scarred EPA chief Scott Pruitt resigned under mounting pressure Thursday as the number of controversies over his personal and professional life continued to pile up.

President Trump, who had been one of the Oklahoman’s staunchest defenders, announced the resignation in a pair of tweets.

“I have accepted the resignation of Scott Pruitt as the Administrator of the Environmental Protection Agency. Within the Agency Scott has done an outstanding job, and I will always be thankful to him for this,” he wrote.

“The Senate confirmed Deputy at EPA, Andrew Wheeler, will on Monday assume duties as the acting Administrator of the EPA. I have no doubt that Andy will continue on with our great and lasting EPA agenda. We have made tremendous progress and the future of the EPA is very bright!”

Pruitt was overwhelmed by a series of controversies, including lavish spending on first-class air travel and an expanded security detail, a sweetheart rent deal and a costly private phone booth in his office. 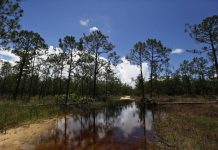 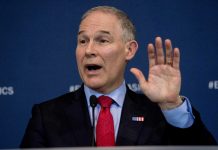