Florida has always been racist but now the world knows

By LESLIE WIMES for the Sunshine State News

This country has a history with a stain. The stain is slavery, Jim Crow, and the dehumanizing of Black people.

How many times were President Obama and First Lady Michelle Obama portrayed as apes or monkeys?

We’ve all seen the memes, posts, and nasty comments about the Obamas.

Ron DeSantis had to have known that his “monkey up” comment was going to trigger the most hurtful, hateful images regarding Andrew Gillum.

Maybe that’s what he was going for.

Comments such as those are hurtful to all black people who have been subjected to dehumanizing behavior from hateful people. 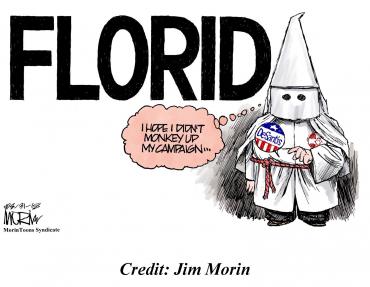 Racism exists in the Republican and the Democratic parties.

Some Republicans are just so overt with theirs.

I say some, because I have Republican friends who do not condone this sort of behavior.

The Republican Party, though, has allowed itself to be defined by the most vile of people.

In the most perfect example of DeSantis appealing to the most vile of people, a group out of Idaho has begun sending a racist robocall, attacking Andrew Gillum. See Friday’s story in POLITICO Florida, “Racist robocalls mar Florida’s race for governor.”

Is it those people that DeSantis is trying to reach?

Ron DeSantis has been accused of being an administrator of a Facebook page that promoted racism, homophobia, xenophobia, anti-Muslim sentiments, and every other hateful thing one can imagine.

Is this who would be the best governor for ALL of the people of Florida?

No. Absolutely not. Florida is a big, diverse state. We all belong here. We all have a right to be here.

I know DeSantis is saying his “monkey this up” comment wasn’t a racist dig at Andrew Gillum.

I just don’t believe him.

COVID Cases Rise at a Record Rate: DeSantis joins a group of GOP leaders who keep business as usual