On this edition of the Politically Incorrect Podcast, my guest is Joseph Hammond who is from the American Media Institute. He is a senior at AMI writer and just returned from the Middle East where he found that President Donald Trump has had some success without even having his first meeting on the first foreign trip of his presidency.

We have a very interesting and entertaining chat about how things in the Middle East will likely go well for President Trump.

The following article was penned by Hammond.

For the Trump administration, the easy task was the missile attack against Syria; the hard part is building a revamped coalition of Arab allies to change the dynamic in the Middle East.

Secretary of Defense James Mattis visited Saudi Arabia this week to the lay the groundwork for a visit to the Kingdom by President Trump in the coming weeks.

Yet, the turnaround in U.S.-Saudi relations was the result of a behind the scenes diplomatic breakthrough that may be one of the most important diplomatic achievements of Trump’s first hundred days in office.

The shift began with a very public embrace of Trump’s policy from the Saudis. In March, an op-ed by General Ahmed Hassan Mohammad Asseri, a senior adviser to the Saudi Ministry of Defense, which was published in Fox News – widely believed to be the favorite news source of the White House and especially President Donald Trump himself.

The op-ed was released days before Trump’s Syria strike and suggests at least one pivotal Middle Eastern power has welcomed Trump’s new policies meant to counter-terrorism and weaken Iranian influence.

“We’ve got your back,” Ahmed Hassan Mohammad Asseri wrote in an op-ed published in late March by Fox News. The piece by the high-level Saudi defense official hailed recent creation of a new “41-nation Islamic Coalition is equipping our countries to fight violent extremists by training our security forces and sharing information and intelligence. “

The general’s article also highlighted the fact that the war in Yemen is part of a regional struggle against Iranian influence which has directly impacted Saudi Arabia.

“40,000 mortars, rockets, and other projectiles at [Saudi] towns killing at least 375 civilians, closing more than 500 schools and displacing 24 villages and over 17,000 people,” the general wrote.

The article drew the attention of influential Republican congressional leaders who saw it as a new and welcome embrace of U.S. policy in the Middle East by the Saudis.

“In the struggle against ISIS and an increasingly hostile Iran, it is important that we solidify and strengthen our allies in the region,” says Brian Fitzpatrick (R-Pennsylvania), who serves on the House Foreign Affairs Committee.  “This is particularly true when it comes to Saudi Arabia and the Gulf States who have been important partners in the fight against ISIS and checking Iranian influence in the region.”

“We are hopeful that the Saudi-led Islamic Coalition Against Terrorism will play an increasingly important role in both the fight against ISIS and efforts to push back against Iran’s destabilizing activities in the region,” the Orange County Republican said in his official statement in the Congressional Record accompanying his submission of the piece. “Nowhere is this more relevant than in Yemen.”

In the past Saudi Arabia has been criticized for allowing charity donations to flow to terrorist groups the Saudi government has taken steps to ensure no such funds leave the country and to seriously limit the number of foreign fighters who leave the country.

“Chairman Royce isn’t a sop for the Saudis, so he’s only highlighting the Gen. Asseri op-ed if he thinks that the Saudis have at least started changing for the better regarding cooperating with the U.S.,” said a foreign policy analyst with a think tank that works closely with the committee. “The timing of the op-ed turned out to be more important than anyone could have anticipated because it came just days before the Trump Administration ordered the strike on the Syrian airbase.”

Saudi Arabia has long supported the removal of Assad and offered last year to send ground troops to support the U.S-led coalition against ISIL.

The White House is currently deciding on final approval of a $300 million precision-guided missile sale to Saudi Arabia.

“The Saudis support the U.S. in whatever direction it decides to take in Syria,” said Ali Shihabi the Executive Director of the Arabia Foundation, “And I think Trump’s strike has helped reintroduce the concept of deterrence. When Obama put down a red line regarding chemical weapons in Syria and failed to act, that weakened the idea of deterring such attacks.”

There is a similar dynamic in Yemen. Houthi rebels receive material support from Iran and friendly relations with Russia. In early 2015, when Houthi rebels overran the country and captured Sana’a, the overwhelming majority of countries closed their embassies.

“The embassies of Iran and Russia were the only ones to operate normally after the Houthi takeover of Sana,” said David Anderson, an ex-U.S Marine who is researching the Yemeni conflict, “At the same time Former Yemeni President Saleh is an influential supporter of the Houthi rebellion and has a lot of international connections.” In an interview last summer with Russia Today, Saleh offered Russia access to Yemen’s naval and airbases.

Saudi Arabia is currently leading a multi-nation coalition trying to restore Yemen’s internationally recognized government, which was toppled by the Iranian-backed Houthi rebels.

There are signs that the Trump Administration might further strengthen this new period of closer ties with the Saudis during the planned upcoming coalition offensive against the Houthi rebels in Al Hodeidah, home to a key port and the fourth-largest city in Yemen. U.S. Secretary of Defense Mattis has reportedly urged President Trump in a private memo for the U.S. to provide intelligence and surveillance support for that offensive.

And in a sign that this deepening cooperation is bipartisan, Rep. Raul Ruiz (D-California) introduced a “Stop Iran From Smuggling Weapons to Terrorists Act” last month. The bill would provide for the Department of Defense (DOD) to provide naval training to the Gulf Cooperation Countries and Israel to reduce the threat of mines and improve the naval capabilities of American allies in the region in light of the conflicts in Yemen and Syria. 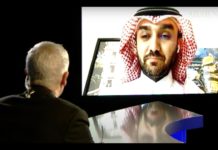