Video from CNN and Fox News.

Jacksonville is seeing flood waters that could be at record levels by noon today. As Hurricane Irma is now a Tropical Storm when it gets to Jacksonville later this morning.

At present, there are thousands without power and reports show the storm has sustained winds of just shy of 100 miles per hour.

The Jacksonville area is expected to see as much as a foot of rain. The water is coming down at a record level and at this point, there is nowhere for it to go.

Governor Rick Scott declared a state of emergency for all 67 Florida counties ahead of Irma.

Presently there is a Flash Flood Emergency, as water is rising to around three feet. The wind is moving the south and it is pushing water from the St. Johns River to downtown Jacksonville.

As the flooding in Jacksonville is a problem there is also massive power outages. At present, there are 366,855 customers without power at this time.

Not just the St. Johns River, the Clay County Emergency Management team said the south prong of the Black Creek is now at major flood stage and both prongs are rising faster than expected.

A tornado watch has been issued for Northeast Florida and Southeast Georgia until 11 a.m. Monday.

Surge from the Cedar River off of Confederate Point Rd from CCone9 on @StormPins #News4JAX #irma pic.twitter.com/Z5Ai1wa6GV 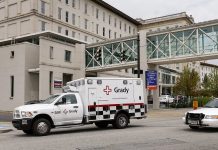