AALGAARD, Norway (AP) — They compete to trick out the flashiest party buses, buy enough beer to level a biker club, and commission crude songs to soundtrack their graduation blowouts. And that’s before they even take their exams.

They are “the russ,” teenagers on the verge of graduating from Norway’s high schools, and they have a tradition of rocking the rite of passage in their otherwise temperate country with a level of drunken revelry that tips the international scale.

Dressed in red and blue overalls adorned with the Norwegian flag and matching emblems of school spirit, russ — short for the decadent senior celebrations called “russefeiring” — fill town streets by day and party at night for a month each year leading up to Constitution Day on May 17.

“In the American movies, we get the impression that they are so crazy. But we have the craziest celebrations here in Norway,” Fredrik Helgesen, a student leader of the russ committee at a school west of Oslo, said. “I don’t think anything in the world is like this.”

The biggest bash happens each year at Kongeparken, a theme park on the outskirts of oil-rich Stavanger. During a three-day festival — think California’s famed Coachella transported from the desert to the snaking fjords by the icy North Sea, Norway’s biggest music acts perform for 13,500 teens ready to rave at all costs.

Driven around the country by professional drivers who can double their earnings taking a month-long sabbatical from their day jobs, the buses are less a method of transportation than discos on wheels. They often are kitted out with newly upholstered sleeping space for 20, laser lighting systems and speakers blasting bass so loud it makes your beer jump out of its glass.

In the spirit of competition, the price tag for all the partying has spiraled up in recent years. Eirik Langoey, of Bergen, says his group’s Russbuss Ghost Town is the best in the park. Like most of the graduates who have splashed out, he says the group worked and saved hard to afford it. 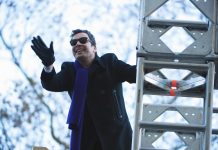 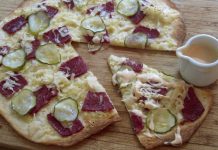 Reuben Pizza is quick & inexpensive for a graduation party