WYOMING, Ohio (AP) — Over and over, Otto Warmbier apologized and begged — at first calmly, then choking up and finally in tears — to be reunited with his family.

North Korean officials seated at long tables watched impassively, with cameras rolling and journalists taking notes, as the adventuresome, accomplished 21-year-old college student from suburban Cincinnati talked animatedly about the “severe crime” that had put him there: trying to take a propaganda banner for someone back home, supposedly in return for a used car and to impress a semi-secret society he wanted to join, and all under the supposed direction of the U.S. government.

“I have made the worst mistake of my life!” he exclaimed as his formally staged Feb. 29, 2016, “confession” to anti-state activities ended in Pyongang.

More than 15 months later, he has finally been reunited with his parents and two younger siblings.

Whether he is even aware of that is uncertain.

“His neurological condition can be best described as a state of unresponsive wakefulness,” said Dr. Daniel Kanter, director of neurocritical care for the University of Cincinnati Health system. Doctors say he has suffered “severe neurological injury,” with extensive loss of brain tissue and “profound weakness and contraction” of his muscles, arms and legs. His eyes will open and blink, but without signs of understanding verbal commands or his surroundings.

Warmbier, now 22, remains hospitalized at the UC Medical Center immediately after his arrival late Tuesday aboard a medevac flight following North Korea’s decision to release him for what it called humanitarian reasons — and under strong pressure after the Trump administration learned of his condition in a special U.S. envoy’s June 6 meeting in New York with North Korea’s ambassador to the United Nations.

His parents, Fred and Cindy Warmbier, were told he had been in a coma since shortly after being sentenced March 16, 2016, to 15 years of prison with hard labor.

If life had gone to plan, he today would be in his first month as a new graduate of the University of Virginia.

Fred Warmbier, father of Otto Warmbier, a University of Virginia undergraduate student who was imprisoned in North Korea in March 2016, speaks during a news conference, Thursday, June 15, 2017, at Wyoming High School in Cincinnati. Otto Warmbier, serving a 15-year prison term for alleged anti-state acts, was released to his home state of Ohio on Tuesday in a coma.

He had planned to study abroad in his third year of college in China and heard about Chinese travel companies offering trips to North Korea. His parents were OK with it.

“Otto’s a young, thrill-seeking, great kid who was going to be in that part of the world for a college experience,” Fred Warmbier explained.

Young Pioneer Tours described itself as providing “budget tours to destinations your mother would rather you stayed away from.” They also included Iran, Iraq and former Soviet countries.

He booked a five-day tour for late December 2015 and was in the process of leaving on Jan. 2 2016, to return to China when he was detained.

The U.S. State Department warns against travel to North Korea. While nearly all Americans who have been there have left without incident, visitors can be suddenly seized and face lengthy incarceration for what might seem to them to be minor infractions. A state-run news agency released a short, grainy video with a shadowy, unrecognizable figure that purported to show Warmbier taking the banner down from the wall of his hotel.

There have been critics at home of Americans who venture into the unfriendly country, leaving themselves open to becoming pawns. Ohioan Jeffrey Fowle was detained in 2014 when he intentionally left a Bible in a night club. Fowle was freed after six months; he said he was kept isolated most of the time but not physically abused. He and others freed from North Korea have said they were coached and coerced into giving a confession there.

“Every once in a while they single out someone to make a point, and this was just Otto’s turn. It’s so sick and warped and unnecessary and evil.” — Danny Gratton, Warmbier’s roommate in Pyongyang

Former National Basketball Association star Dennis Rodman gets warm receptions there. When he arrived on his latest visit the day of Warmbier’s release, there was immediate speculation about his role. But officials in Washington and Pyongyang said he had none.

A British member of the Young Pioneer tour group who was Warmbier’s Pyongyang hotel roommate, Danny Gratton, told The Washington Post last week that he never heard or saw any hint that Warmbier planned or did anything wrong. He called him mature and very polite.

Warmbier was abruptly pulled out of the airport security line, Gratton said. He didn’t resist or seem scared, he recalled, and gave Gratton a half-smile as he was led away.

“He was just a young lad who wanted a bit of adventure,” Gratton told The Post. “Every once in a while they single out someone to make a point, and this was just Otto’s turn. It’s so sick and warped and unnecessary and evil.”

Warmbier’s father has accused the tour company of helping lure Americans to North Korea. The company has claimed Warmbier was the first to be arrested of the 7,000 people it had taken to North Korea.

What happened to Otto Warmbier after his sentencing might never be known outside the reclusive country.

His parents discount the North Korean claim that he contracted botulism, caused by a rare toxin, and then fell into coma after taking a sleeping pill. His doctors in Cincinnati found no evidence of botulism, but also said there were no signs of fractures to indicate he was beaten into his present state. His condition is consistent with cardiopulmonary arrest from a loss of oxygen to the brain, they said.

U.S. doctors said they received some North Korean medical records but can’t make conclusions about the cause or the care he got.

In his upscale hometown of Wyoming, after nearly 18 months of wariness about saying anything that might disrupt diplomatic efforts, people now feel able to speak freely of their admiration for the popular young man who played soccer and was salutatorian of his 2013 class at the esteemed Wyoming High School.

“He was generous, outgoing, sweet, smart as a whip; just an overall good guy,” said Danica White, his sophomore English teacher. He brought “this brightness” and excitement to the classroom, she said.

Doctors in Cincinnati who are treating the American college student released by North Korea in a coma say he has severe injury to all regions of his brain. (June 15)

Residents have wrapped ribbons in the school colors of blue and white around the trees and utility poles lining the main road. It’s a pleasantly close-knit, older suburb that usually makes the news for academic or athletic accomplishments like Warmbier’s in his previous life.

“Nothing really bad ever happens in Wyoming,” said Ellie Boettcher, 14. “It’s kind of a like a bubble, so it’s really tragic.”

Residents rallied around Fred Warmbier with chants of “Otto Strong” and “We love you!” after he answered questions at a news conference Thursday in the high school’s media center.

He expressed gratitude to President Donald Trump’s administration, which Thursday described “quiet diplomacy” leading up to the release, for getting his son back after the family had been so long deprived of information.

The elder Warmbier, who owns a metal parts-finishing company , praised his son’s “performance” at the North Korea confession and paid homage by wearing the same light-colored sport jacket his son did that day.

He told reporters that his son is “a fighter” and that he believes he fought for months to get back to his family.

“I’m able to talk to you on Otto’s behalf,” Warmbier said, gripping the jacket’s lapels. “And I’m able to wear the jacket that he wore …”

Fred Warmbier, father of Otto Warmbier, a University of Virginia undergraduate student who was imprisoned in North Korea in March 2016, speaks during a news conference, Thursday, June 15, 2017, at Wyoming High School in Cincinnati. Otto Warmbier, serving a 15-year prison term for alleged anti-state acts, was released to his home state of Ohio in a coma and medically evacuated Tuesday.

It was Fred Warmbier’s turn to choke up.

He was very proud of his son, he said, and would soon be back by his bedside with wife Cindy. He said they talk to him, read to him, and try to make him comfortable. Doctors declined to discuss treatment plans or his prognosis with the news media.

“We’re proud of the fact that our family are basically happy, positive people,” Fred Warmbier said. “And we’re going to stay that way.”

Later, Otto’s younger brother Austin shared with reporters a video, the last known one of Otto as a free person.

It’s in North Korea. He, other young adults and some children gather to toss snowballs at the camera. He is smiling and laughing.

“This is the Otto that I know and love,” Austin said in an accompanying email. “This is my brother.” 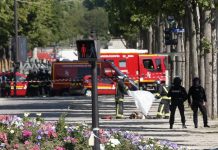 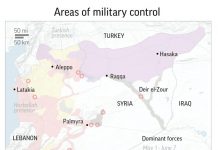 Tensions rise in Syria as Russia, Iran send US warnings 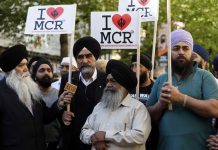 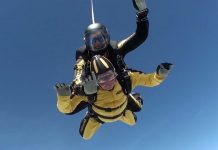